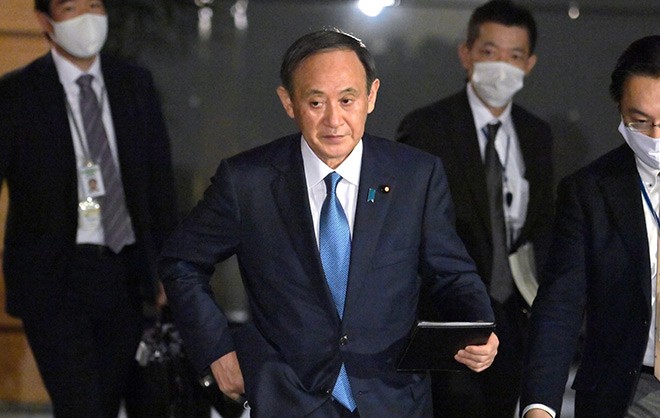 “I went to the party just to exchange greetings with attendees,” Suga said on a Nippon TV news program on the evening of Dec. 16. “But I ended up staying there for about 40 minutes to chat with them. I deeply regret that.”

He was also asked by reporters about the issue at the prime minister’s office in the late afternoon that day.

“The public may have misunderstood (my behavior),” he said. “In that sense, I truly regret (what I did).”

He added that the attendees maintained a proper distance from each other.

But the criticism was mostly about the number of people at the dinner party, which was held at a steak restaurant in Tokyo’s upscale Ginza district on the evening of Dec. 14.

The central government’s panel of experts on dealing with the pandemic is urging people to refrain from holding dinner parties in groups of five or more because such large gatherings pose a high risk of contracting and spreading the virus.

Earlier that day, Suga abruptly announced that the Go To Travel campaign, one of his pet projects, would be suspended nationwide from Dec. 28 to Jan. 11.

Suga’s attendance at the large dinner party has further raised doubts about his seriousness in battling the novel coronavirus.

Opposition lawmakers said it is hypocritical of the prime minister to ask the public to exercise self-restraint to prevent infections while he himself ignores health recommendations.

Even members of the ruling coalition said Suga should be trying to set an example for people to follow during the pandemic.

However, Yasutoshi Nishimura, the government’s point man on battling the spread of COVID-19, defended Suga.

“(We) are not saying that having a dinner with five or more people is bad without any exceptions,” Nishimura told a Lower House Cabinet Committee session on Dec. 16. “We are asking (the public) to refrain from (dining with many people) as much as possible and, should they decide to do so, to take thorough infection prevention measures.”

His words only fueled the criticism.

“The government is sending ambiguous messages, causing confusion,” said Kensuke Onishi, a member of the main opposition Constitutional Democratic Party of Japan, during the committee session, referring to Nishimura’s comment. “The public can’t figure out which way they should go.”