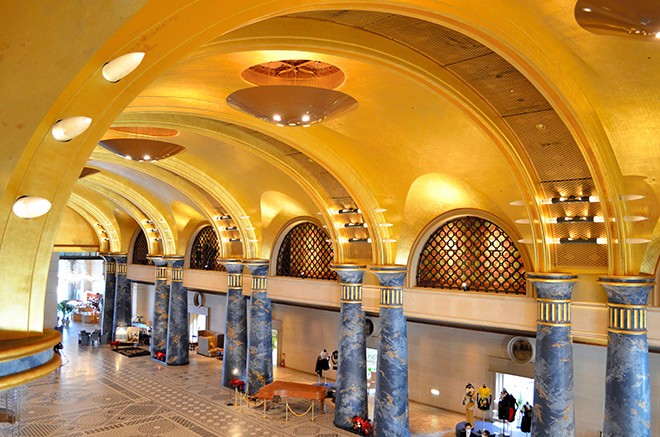 The entrance hall at Hotel Kawakyu has been recognized as having the world's largest continuous gilded ceiling by the Guinness World Records. (Hiroshi Ono)

SHIRAHAMA, Wakayama Prefecture--The entrance hall at the Hotel Kawakyu, a grandiose, castle-like structure in this coastal spa resort, has been recognized by Guinness World Records for having the world's largest gilded ceiling.

The glitzy hotel was constructed between 1989 and 1991 at the height of Japan's asset-inflated economic boom at a total cost of 40 billion yen ($387 million). It was designed to be a world-class structure built in Japan’s traditional and elegant Sukiya architectural style.

The entrance hall, measuring about 14 meters wide and 45 meters long, makes it feel like a palace.

It boasts an 11.2-meter-high arched ceiling covered with 190,000 sheets of 22.5-karat gold leaves, each measuring just 0.001 millimeter thick. The leaves, which contain at least 90 percent gold and weigh a total of 2.5 kilograms, make the space glisten and glow.

A Guinness official inspected the golden ceiling and confirmed that it is a whopping 1,056.97 square meters, distinguishing it as the largest continuous gilded ceiling in the world. The hotel was presented with an official certificate on Dec. 8.

Yasue Hori, a family member of the hotel’s owner at the time of its completion, was involved with its construction. She came to the certificate-giving ceremony and explained that the ceiling was designed by architect Yuzo Nagata, who took inspiration from the dome ceiling of Les Invalides in France, built at the initiative of Louis XIV.

"I thought it was ridiculous to cover the ceiling of an onsen ryokan inn in a rural town with gold leaves," Hori said. “But when I received a price estimate, it was cheaper than having it covered with tiles."

"We are most pleased about the recognition," said Yamato Karakami, the president of the hotel management company. "We hope it helps promote the hotel as Japan's 'miraculous building' to the world."