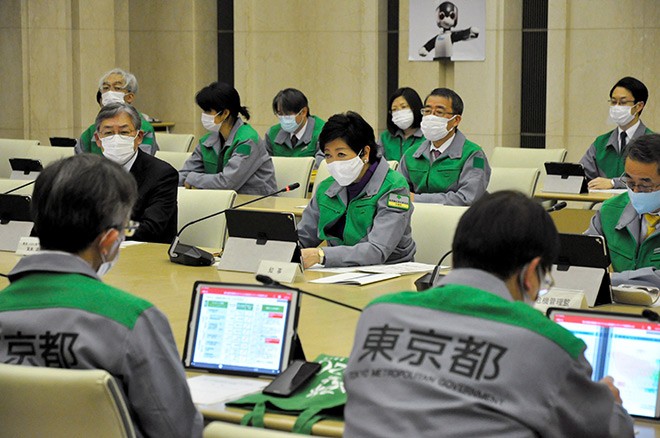 Tokyo Governor Yuriko Koike speaks at a meeting of the metropolitan government’s expert panel monitoring the spread of infections on Dec. 17. (Rihito Karube)

Tokyo issued its highest Level 4 alert for medical services on Dec. 17, warning that the capital’s health care system is nearing collapse from the increasing number of COVID-19 patients requiring hospitalization.

It was the first time the alert level was raised to the maximum, and it came on a day when the number of new COVID-19 cases reached a record 822 in the capital.

The metropolitan government announced the decision at a meeting of its expert panel monitoring the spread of infections.

Since July 9, Tokyo had maintained the second highest level, meaning the health care system is not strained but steps should be taken to bolster capacity at medical institutions.

The capital issues the alert based on a four-point guideline, including the number of patients hospitalized with COVID-19 and the number of serious cases.

The metropolitan government has secured 200 hospital beds for seriously ill COVID-19 patients and 2,800 beds for those with mild and moderate symptoms, bringing the total to 3,000.

Now at Level 4, the government asked medical institutions to increase the bed number to 4,000, including 50 more for patients in serious condition.

The daily number of newly confirmed infections has continued to rise in Tokyo, resulting in more hospital beds being filled.

As of Dec. 16, the number of COVID-19 inpatients stood at 1,960, and many infected patients have been unable to receive hospital treatment within a 24-hour period.

Tokyo had 78 serious cases as of Dec. 15, the most since the state of emergency was lifted in late May. The number remained high, at 69, on Dec. 16.

One big concern for hospitals in the capital is that more people tend to be hospitalized with heart diseases or pneumonia in winter.

To secure enough beds for COVID-19 patients, many hospitals are now freeing up beds intended for patients with other diseases.

At its meeting on Dec. 10, the metropolitan government’s expert panel said the local health care system was becoming stretched because hospitals are having difficulty treating both COVID-19 patients and individuals with different health problems.

The novel coronavirus situation in the capital has shown no signs of improving.

Tokyo reported a then record 678 new infections on Dec. 16. It had a daily average of 534.4 new cases over the week until that day.

The metropolitan government on Nov. 19 raised its alert over the infection situation to the highest level of 4 for the first time since Sept. 10. Level 4 warns that infections are spreading.