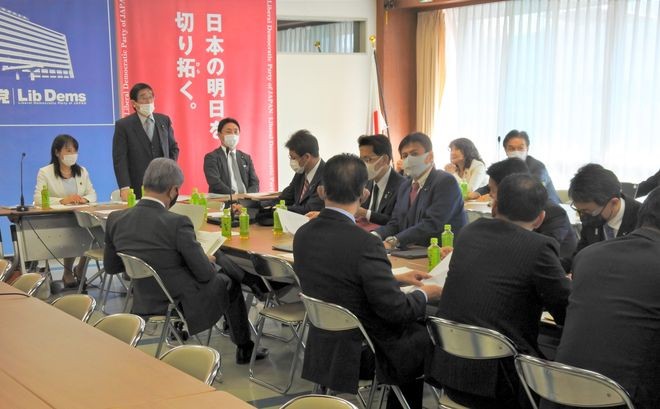 Members of the ruling Liberal Democratic Party meet to discuss the issue of revising the current system requiring married couples to use the same surname at the party headquarters in Tokyo on Dec. 15. (The Asahi Shimbun)

The ruling party’s move to roll back progress toward allowing married couples to use different surnames delivers a harsh blow to the wishes and aspirations of many people.

These individuals have been working hard to build a society where the dignity of each individual is respected and everyone is treated equally irrespective of their gender.

The Liberal Democratic Party has pressured the government into backtracking on a proposal toward changing the long-established rule included in the draft Basic Vision for Formulating the Fifth Basic Plan for Gender Equality.

The four predecessors of the proposed fifth plan to promote gender equality--the first was announced in 2000 and the fourth in 2015--all cited the proposal to scrap the current rule requiring married couples to use the same surname as a policy issue that should be addressed.

The Cabinet Office’s draft plan said the government will “proceed with necessary steps” toward changing the rule, one step forward from the phrase “proceed with considering” the proposal, which was included in the past four plans.

This has drawn an angry response from a group of conservative LDP lawmakers who champion traditional views toward the family.

They have had the Cabinet Office insert an expression to throw a wrench into introducing a new system and replace the phrase with “proceed with further consideration.” These opponents have gone so far as to get the term “fufu besshi” (separate surnames for married couples) removed from the draft plan.

Their action reflects a disturbing lack of awareness of human rights and grossly anachronistic thinking.

Japan is about the only country in the world that has a law to require married couples to use the same surname. Of all Japanese married couples, 96 percent use the husband's surname.

Many Japanese accept the rule as a tradition established during the Meiji Era (1868-1912). But there are also quite a few people who are suffering from unwanted effects of this system, such as disadvantages, inconveniences and a loss of identity.

A growing chorus of calls for giving married couples the choice is hardly surprising given that women are playing increasingly important roles in society.

In the Cabinet Office’s survey in 2017, 42.5 percent of the respondents said they were not opposed to a revision to the law for this purpose, compared to 29.3 percent who saw no need for such a change.

The LDP’s move means it falls further out of step with public sentiment. The fifth plan for gender equality, if finalized in line with the LDP’s demand, will disregard the pain of people who are forced to change their surnames at marriage against their wishes and will be at odds with a growing trend in society.

The opponents argue that the introduction of the proposed new rule would damage family bonds and cause harmful effects to many children. But there are many families where the parents are not legally married and use different surnames while building good relationships with their children. The opponents’ argument does not seem to be rooted in reality.

Some have proposed making it easier for people who have changed their surnames upon marriage to use their original names. But there are many situations that require the use of officially registered names, such as when receiving national certification.

The idea is not a good alternative because of the heavy burden of using two different surnames.

Sadly, Prime Minister Yoshihide Suga and Justice Minister Yoko Kamikawa, who have made remarks indicating their support for the proposal to change the name rule, are both sitting on the sidelines of the debate.

When asked about his thoughts on the issue during an Upper House Budget Committee session in November, Suga said, “I think I am responsible for what I have said as a politician.”

The question is what he should do to fulfill his political responsibility for his past remarks about the issue.

The answer will be clear to Suga if he pays serious attention to the suffering of people who are forced to change their names and the demands of society.