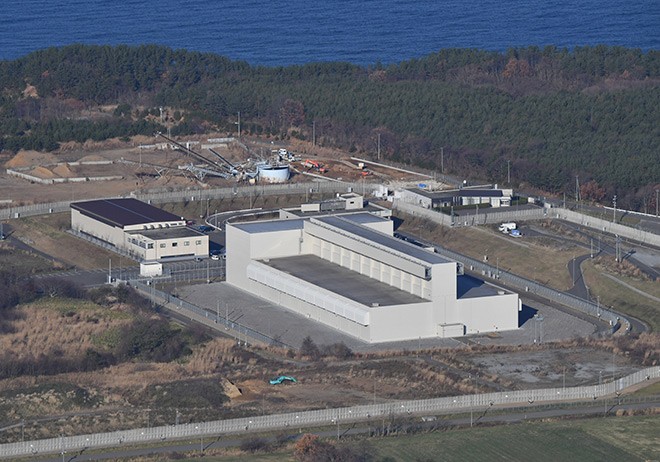 Utilities have revived plans to expand the use of an intermediate storage facility for spent nuclear fuel, but immediately objections were voiced by the same mayor who quashed a similar proposal two years ago.

The Federation of Electric Power Companies of Japan (FEPC) on Dec. 17 formally announced that it would push forward with the plan to allow all utilities that operate nuclear power plants to use the intermediate storage facility in Mutsu, Aomori Prefecture.

Kazuhiro Ikebe, head of FEPC, met the same day with economy minister Hiroshi Kajiyama, who oversees the nuclear power industry, and presented the proposal. Kajiyama pledged his cooperation to realize the plan.

However, also on Dec. 17, Mutsu Mayor Soichiro Miyashita made clear that he would never allow all utilities to use the facility, which will be operated by Recyclable-Fuel Storage Co. (RFS) starting in fiscal 2021.

RFS was jointly established by Tokyo Electric Power Co. and Japan Atomic Power Co. Under the original plan, spent nuclear fuel from only those two companies will be stored at the Mutsu facility in the northern prefecture.

But in 2018, Kansai Electric Power Co. indicated that it also wanted to store its spent nuclear fuel at the Mutsu facility.

Kansai Electric operates nuclear power plants in Fukui, a central Japan prefecture that faces the Sea of Japan. Fukui prefectural government officials asked the utility to find a storage facility for spent nuclear fuel outside of the prefecture.

When word reached Miyashita about the Kansai Electric plan, he immediately opposed, and the utility was forced to retract the proposal.

Under the latest FEPC proposal, other utilities besides TEPCO and Japan Atomic Power would be able to use the Mutsu facility as long as they paid storage fees. But the real, near-term beneficiary would still be Kansai Electric.

The utility wants to resume operations at its aging nuclear power plants in Fukui Prefecture, but prefectural government officials said one condition for their consent is that a plan for storing spent fuel outside the prefecture be presented before year-end.

In his meeting with Kajiyama, Ikebe explained that the new proposal would broaden the range of options available to all nuclear plant operators.

FEPC officials were scheduled to meet with Miyashita on Dec. 18.

The mayor was outraged two years ago because his local government was not consulted beforehand when the Kansai Electric plan surfaced in media reports.

That experience has apparently kept Miyashita wary of any plan to change the original nature of the storage facility.

The Nuclear Regulation Authority approved the safety screening of the storage facility this summer.

FEPC came up with the new proposal mainly because it was asked to do so by Kansai Electric.
But executives of other utilities said they decided to go along with the plan because they will also eventually need consent from local governments to operate aging nuclear plants.

The economy ministry supports the plan because it wants to ensure nuclear power plants can operate without worrying about where to store the spent nuclear fuel.

Prime Minister Yoshihide Suga has pledged to have Japan reach a net zero greenhouse gas emission target by 2050, and nuclear plants would be a key factor in reaching that goal.

(This article was compiled from reports by Hiroki Ito, Rintaro Sakurai, Hiroki Hashimoto, Yo Noguchi and Taiji Ito.)