New residents near Fukushima nuclear plant can get 2 million yen 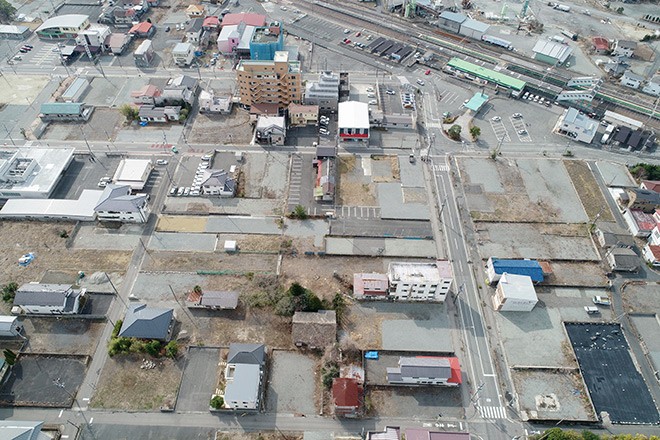 JR Namie Station, upper right, in Fukushima Prefecture is surrounded by vacant land in March 2019, after homes and shops damaged by the 2011 nuclear disaster were demolished. (Asahi Shimbun file photo)

The government will pay up to 2 million yen ($19,300) to families that move to areas around the crippled Fukushima No. 1 nuclear power plant, an unprecedented offer for recovery from the 2011 disaster.

Under the program that will start in fiscal 2021, the Reconstruction Agency will provide an additional amount of up to 4 million yen to those who start new businesses in 12 cities, towns and villages where residents had been ordered to evacuate from after the triple meltdown at the plant.

Eleven of those municipalities had come under the central government’s evacuation order, while in the remaining municipality, Hironomachi, residents were ordered to leave by the town government.

Katsuei Hirasawa, the reconstruction minister, said on Dec. 17 that his agency is focused on repopulating those areas because only around 20 percent of residents have returned there even after the evacuation orders were lifted.

One requirement is that the families must live in the locations for at least five years.

The amount is 800,000 yen for single-person households that relocate from other areas of the prefecture and 1.2 million yen for those from outside the prefecture.

The agency’s goal is to have 300 people moving into the areas in the first year. It will start accepting applications for the program as early as next summer.

The agency will also provide a subsidy to Fukushima Prefecture and local municipalities to promote their town development and entice more people to relocate to the target areas. It expects 5 billion yen will be needed to carry out the program for fiscal 2021.

In fiscal 2019, the central government started a program to provide up to 1 million yen to people who move out of Tokyo’s 23 wards as part of its efforts to promote local revitalization.

The upper limit of money given to those eligible for the Reconstruction Agency’s new program for Fukushima Prefecture is double the amount set under the government’s local revitalization program.