An opening ceremony was held Dec. 18 for the life-size Gundam model exhibition in Yokohama. (Video footage by Nanako Matsuzawa) 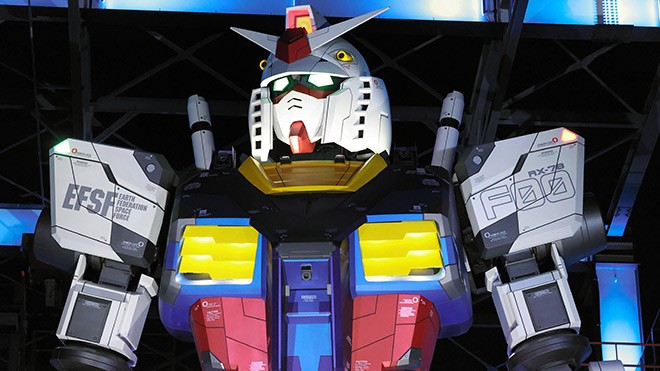 YOKOHAMA--Even the creator of the “Mobile Suit Gundam” robot anime franchise was stunned at coming face-to-face with a life-size, 18-meter-high, 25-ton moving version of his pet creation.

The massive Gundam opened for public view at Yamashita Pier of Yokohama Port on Dec. 19. The exhibit will remain on show through the end of March 2022.

One of those attending the Dec. 18 opening ceremony was Yoshiyuki Tomino, the creator of the anime franchise. He was stupefied to see the model move its legs and arms.

“I cannot believe there were people who were so serious about creating this model,” he said.

The rock band Luna Sea performed at the ceremony. The five-member group created the theme song for the 40th anniversary version of the Mobile Suit Gundam TV series.

Guitarist Sugizo has been a Gundam fan from the outset.

“I was moved to tears because I felt I had returned to my 10-year-old self,” he said.

The movable robot is the centerpiece of the Gundam Factory Yokohama project, a collaboration of Bandai Namco Group, the city of Yokohama and other organizations.

The model is of the very first Gundam robot. Different movements are coordinated every 30 minutes by technicians working in a remote-control room.

Shops and a cafe at the site provide Gundam-related goods and food products based on a menu of a famed Yokohama hotel.

Originally, the exhibition was to have begun on Oct. 1, but the novel coronavirus pandemic delayed the start until Dec. 19. But with the health scare still not under control, limits are being placed on the number of visitors to the exhibition. Tickets will designate the time and date of entry.

Entry to the special observation deck is priced at an additional 3,300 yen, for visitors aged 7 and older. Taxes are included in both fees.

The special admission tickets for the observation deck, however, have already sold out for December. Tickets are currently being sold online and through a special app.

More information is available on the project’s official website: (https://gundam-factory.net/).