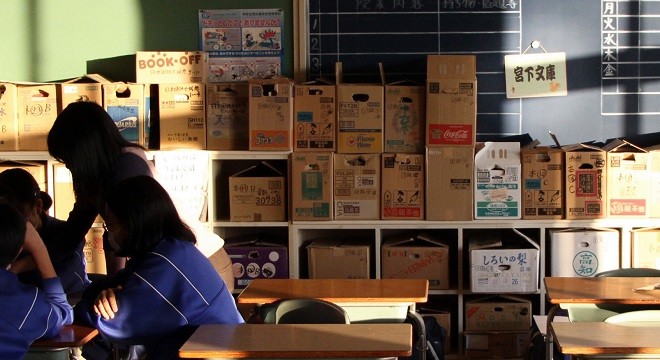 One thousand books purchased by Yutaka Miyashita for a reading corner are kept in boxes at an unused classroom in Inba Junior High School of Inzai, Chiba Prefecture, on Nov. 26. They will eventually be displayed on shelves. (Masafumi Ueda)

INZAI, Chiba Prefecture--A beloved teacher who used books to pull himself out of despair in his fight against cancer donated his life savings--around 60 million yen ($580,700)--to spread his love of reading among children.

Yutaka Miyashita contributed the money to Inzai and Shiroi cities in Chiba Prefecture a month before he died of cancer in autumn at the age of 59. The funds will be used to create small school libraries named after the donor.

“When I was losing heart, books helped me to step forward with their strong miraculous power,” Miyashita wrote in a statement. “I decided to donate for book purchases because I would like to impart that belief to children and allow them to understand the greatness of books.”

Miyashita, who lived in Yachiyo, long served as a Japanese language teacher at junior high schools in Inzai and Shiroi.

During his eight years at Shiroi Junior High School, the dedicated educator created a class newsletter full of personal messages addressed to each student almost every day.

In August 2018, when he was working at Inba Junior High School in Inzai, a problem with his tongue was detected at a dental clinic. Early stage tongue cancer was later confirmed at a hospital.

Miyashita underwent surgery and had to recuperate at home for six months. He returned to the school in January 2019 and was put in charge of classes for third-year students.

But the cancer returned in August, forcing him to take time off again.

While combating the tumor, Miyashita set up a corner in a corridor at the school to display books that he had carefully selected. He paid for the titles out of his own pocket and penned brief descriptions of each work.

The publications ranged in genre from international conflicts and the 2011 Great East Japan Earthquake and tsunami to self-help material.

The collection included the Japanese version of “Le journal de Myriam,” “Shinsai to Tetsudo: Zen Kiroku” (The earthquake and railways: All records) and “Chugakujidai ni Shiteoku 50 no Koto” (50 things that should be done during junior high school days).

In spring this year, the cancer made it difficult for Miyashita to move his tongue. In a squeezing voice, he told Akihisa Miura, 56, the school’s principal, about his plan to donate all of his personal funds for the children.

Miyashita, who was single, had saved 60 million yen over his 35-year teaching career.

Astonished by the offer, Miura advised Miyashita “to keep the sum for your mother.”

Miyashita, however, would not change his mind.

In the statement written on two A4 sheets of paper in July, the teacher explained the pain, suffering, anxiety and horror he felt during his battle against cancer as well as why he decided to donate the money.

Miyashita said he devoured books to try to find hope in literature, made many “discoveries” and felt “sympathy” on a number of occasions.

He said the titles he read during that period included “Gusuko Budori no Denki” (The Life of Budori Gusuko), a children’s story by Kenji Miyazawa (1896-1933) that centers around a boy who sacrifices himself to protect others, and “Kuma no Kocho Sensei” (Bear school principal), Hitomi Konno’s picture book modeled after an elementary school principal died of cancer.

Miyashita was expected to serve as a judge for a chorus contest in October at Inba Junior High School. But he died on Sept. 20.

About 500 students and others attended his funeral, according to school officials.

Yui Kawabata, 16, a senior high school student who showed up for the funeral, said Miyashita was her classroom teacher in her first-year at junior high school. She said he distributed hand mirrors to all his students to “check your smiles” during rehearsals for a chorus competition.

“He was a teacher who spoke in a loud voice in class that made us feel his strong passion,” Kawabata said.

Miura said Miyashita was “not conscious of money.”

“He appeared to enjoy spending time with children more than anything else,” the principal said.

The two cities that received his donations plan to install small Miyashita Bunko libraries at all of their 40 or so elementary and junior high schools within three years.

As for Miyashita’s mother, she appeared quite pleased by where her son’s savings went.

“The money was earned by Yutaka, so he can use it as he likes,” the mother said, according to the Inzai city education board. “It will fill me with joy if Yutaka’s wishes are expressed in the form of books so they will be alive as knowledge in children.”