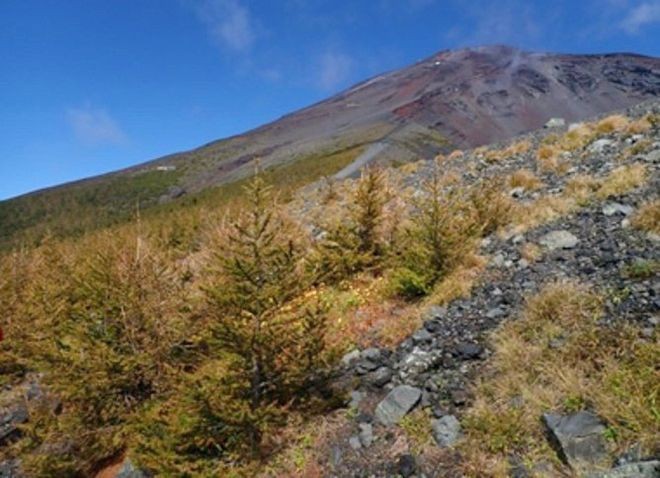 NIIGATA--The tree line near the halfway point of 3,776-meter Mount Fuji, considered the uppermost limit where such plants can thrive, has steadily climbed over the past four decades and global warming offers the best explanation, researchers say.

A joint study by Niigata and Shizuoka universities also found that Japanese larch trees, known for their stunted posture as if to hug the wind-swept terrain, stand more upright these days.

The only possible explanation appears to be the shift in global warming.

The tree line refers to the boundary where trees can grow under alpine conditions that involve, among other things, ferocious winds and low temperatures of winter and dryness.

On majestic Mount Fuji, the tree line is located near the Fifth Stations, the symbolic halfway spots designated along climbers’ trails on the nation's highest peak.

Hitoshi Sakio, a professor of forest ecology at Niigata University’s Sado Island Center for Ecological Sustainability, started an on-site survey along a section of Mount Fuji’s timberline while he was an undergraduate student in 1978.

Over the four decades through 2018, he worked with a nonprofit organization based in Shizuoka Prefecture and other parties.

His survey targeted trees with a height of 1.3 meters or more growing on a sliver of land, some 2,400 meters above sea level, on the southeastern slope.

Sakio counted the number of the trees, took records of their growth and studied how their shapes and other attributes changed.

His latest findings show that the upper end of a Japanese larch forest, which defines the timberline, had moved 30 or so meters upward along the slope from 40 years earlier, and the number of trees in the area had also increased.

It also emerged that the trees, which previously grew low in a tabular form as if to creep over the ground, were no longer doing so and were standing upright.

“The remarkable shift in the shape of Japanese larch trees is due to external factors, including global warming,” Sakio said.

He pointed out the mean maximum temperature near Mount Fuji’s summit over the summer months from June through September has risen about 2 degrees during the past 50 years. That, he surmises, likely lengthened the period of the year when trees can grow larger.

These factors presumably allowed the trees to form more solid stems and branches that can withstand, among other things, the strong winds and low temperatures of winter, he added.

Alpine ecosystems are believed to be highly susceptible to the impact of climate change.

“Tracking changes in Mount Fuji’s timberline allows the effects of climate change to be captured and its impact on lower-elevation ecosystems to be predicted,” Sakio said in explaining the significance of his study.

The results of the research, which Sakio conducted jointly with Takehiro Masuzawa, a visiting professor of plant ecology with Shizuoka University’s Center for Integrated Research and Education of Natural Hazards, were published online Nov. 10 in Plants, an international science journal.