VOX POPULI: Shinjo’s bid at 48 to return to baseball fires up middle-age fans 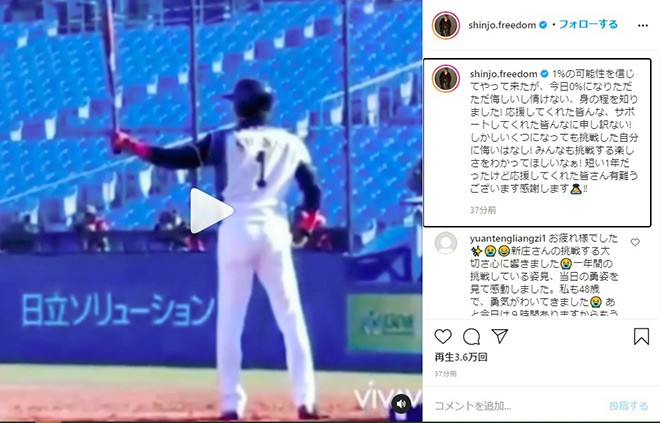 Former outfielder Tsuyoshi Shinjo announces that he has given up on his attempt to return to professional baseball. (Captured from Tsuyoshi Shinjo’s Instagram account)

All athletes, no matter how outstanding, have nemeses, such as age and time.

Baseball great Jim Palmer, who left his mark on major league history, was no exception.

Palmer achieved almost every honor possible for a pitcher, notching 268 career wins for the Baltimore Orioles. He was inducted into the Baseball Hall of Fame in 1990.

The following year, Palmer, glove in hand, turned up for a workout. He wanted to pitch on a major league mound once again at age 45, seven years after his retirement.

Some derided his comeback bid as a version of “midlife crisis,” or feelings of anxiety and depression that can occur to middle-age people, often in the prime of their working career.

Hideo Nomo, a former Los Angeles Dodgers pitcher who took the major leagues by storm in the mid-1990s, once told me of his fears of aging and having a period of absence from the field.

“In the years leading up to retirement, I was training all through the off-season,” he said. “The longer you rest, the harder it becomes for you to regain physical strength and your touch.”

Palmer gave up on his comeback before the start of the season, partly due to an injury. But the way he challenged his fullest potential was quietly praised in the end.

I've spent two consecutive columns writing about baseball because I was inspired by another comeback attempt.

Tsuyoshi Shinjo, a former outfielder who also played in the major leagues, participated in a recent tryout for players who have left their teams, conducted by all 12 Nippon Professional Baseball teams.

Fourteen years have passed since he retired, after wowing fans in Japan and the United States with his powerful throwing arm and batting skills.

Shinjo’s attempt at age 48 should probably be described as “reckless,” but he trimmed surplus fat over one year of hard training and hit safely to left during his fourth and last at-bat, driving in a run. The ball flew on a sharp and beautiful trajectory.

His sincere commitment to baseball, hidden under his unrestrained language and behavior, was on full display on the field during the fiercest battle for survival among professional ballplayers.

After no club offered him a deal, Shinjo announced he was abandoning his comeback bid. But I think his endeavor touched the heartstrings of many middle-age and elderly people.

Let us now wait for someone else to defy his or her age.