Support rate for Suga Cabinet plummets to 39% in health crisis 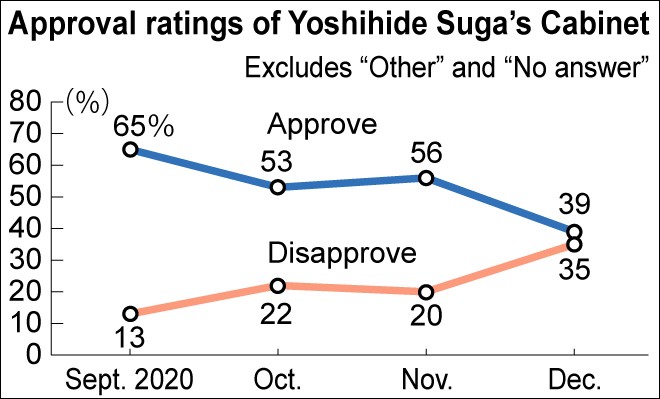 The support rate for Prime Minister Yoshihide Suga’s Cabinet nose-dived from 56 percent to 39 percent, as criticism continued over his handling of the Go To Travel campaign, an Asahi Shimbun survey showed.

The Dec. 19-20 telephone survey showed the disapproval rating for the Cabinet was 35 percent, a jump from 20 percent in the November survey.

Fifty-six percent of respondents said they “did not approve” of the central government’s handling of the novel coronavirus pandemic. It was a sharp increase from 40 percent in the November survey.

Seventy percent of respondents said Suga “is not showing leadership” during the pandemic, while 19 percent thought otherwise.

Only 33 percent “approved” of the way the government has responded to the health crisis.

The Suga administration had been criticized for continuing the Go To Travel tourism-promotion campaign despite the surge in new infections around the country.

The prime minister on Dec. 14 finally announced that the program would be suspended nationwide from Dec. 28 to Jan. 11.

Seventy-eight percent of survey respondents “agreed” with the decision to suspend the campaign during the year-end and New Year holidays, compared with 15 percent who “disagreed.”

However, 84 percent of those who agreed with the suspension said the decision came “too late.”

Suga has also come under fire for attending a dinner party with more than five people, an apparent violation of a government health panel’s recommended restrictions to prevent the novel coronavirus virus from spreading.

Sixty-six percent of respondents said the dinner party was “problematic,” while 28 percent said it was “not problematic.”

The recent spread of infections has apparently further dampened enthusiasm for the 2020 Tokyo Olympics and Paralympics, which have been postponed until next year because of the pandemic.

Thirty percent of respondents said the Tokyo Games “should be held in summer 2021,” down sharply from 41 percent in The Asahi Shimbun’s survey in October.

The approval ratings for the government were less than 50 percent in every age group.

The percentage of those 50 or older who disapproved of the Cabinet outpaced those who approved.

Among LDP supporters, the Cabinet’s approval rating was 67 percent, a drop from 83 percent in the November survey.

The approval rating plummeted from 39 percent in November to just 22 percent among unaffiliated voters, the survey showed.

Public support for the LDP was 38 percent, compared with 39 percent in the November survey.

Home phone or mobile numbers selected at random by a computer were called for the survey. It received 1,521 valid responses, from 53 percent of landline and 45 percent of mobile phone numbers called.