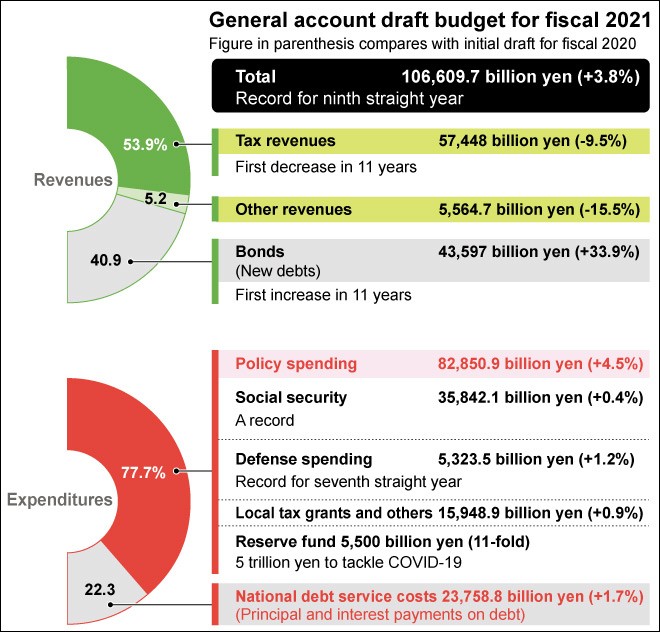 Japan's Cabinet on Dec. 21 approved a record 106,609.7 billion yen ($1,031 billion) general account draft budget for fiscal 2021, issuing debts to cover about 40 percent of the total due to an anticipated tax revenue shortfall from the novel coronavirus pandemic.

The size of the draft budget, about 3,900 billion yen more than for fiscal 2020, marks a record for the ninth consecutive year. It is also the third year in a row for the figure to top 100 trillion yen.

Tax revenues for the new fiscal year were projected to reach 57,448 billion yen for the first decline in 11 years for initial budget expectations. The figure is more than 6 trillion yen lower than the record estimate for last year’s initial budget.

To cover the shortfall, the government plans to issue new debts totaling 43,597 billion yen, the first such increase in 11 years.

That will leave Japan with 990,306.6 billion yen in outstanding national bonds, close to an eye-popping 1,000 trillion yen, further exacerbating the nation’s fiscal woes.

The government will earmark a record 5,500 billion yen as a reserve fund to enable it to move swiftly to contain the pandemic.

Of that figure, 43.4 billion yen will be spent to reimburse more in medical fees to pediatricians and general practitioners as part of COVID-19 countermeasures.

The government will set aside 600 million yen to bolster the operations of public health centers and 20.7 billion yen to strengthen steps to keep the virus at bay at airports and ports.

Fees for nursing care and welfare services for people with disabilities, which are reviewed every three years, will be raised to improve the working conditions of those on the front lines of fighting the public health crisis.

Authorized prices for drugs prescribed at hospitals will be reduced to trim 100 billion yen from social security expenditures.

The government also pledged to fund childcare services for 140,000 children over four years from fiscal 2021 to resolve the longstanding issue of children on waiting lists for nursery schools.

An outlay of 300 million yen will be earmarked to keep class numbers at publicly run schools to 35 or less over five years, starting from fiscal 2021.

Defense spending will rise to 5,323.5 billion yen, a record for the seventh straight year, including 57.6 billion yen set aside for the development of a new fighter jet to replace the Self-Defense Forces’ aging F-2 aircraft.

The government will allocate 8.1 billion yen for the establishment of an agency for digital transformation, a pet project of the Suga administration to promote information technology.

Local tax grants will be increased by 139.6 billion yen to 15,948.9 billion yen as local governments brace for a plunge in revenues due to the pandemic.