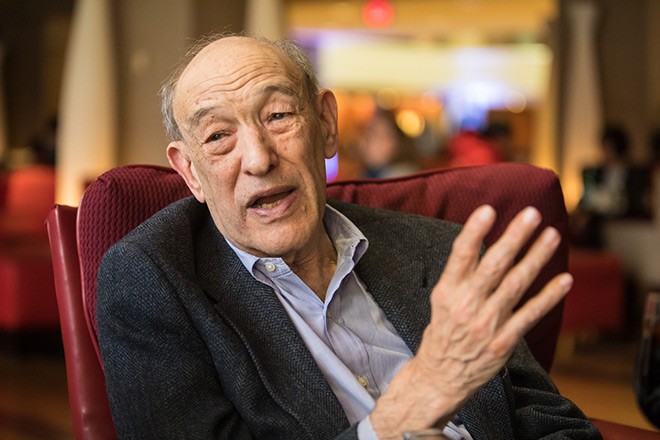 Ezra Vogel, a famed U.S. expert on Japan and professor emeritus at Harvard University, dies at 90. The photo was taken in Washington in 2018. (Asahi Shimbun file photo)

NEW YORK--Famed Japanologist and author Ezra Vogel, a professor emeritus at Harvard University, died at a hospital in Cambridge, Massachusetts, on Dec. 20. He was 90.

Vogel wrote the provocative best-selling book “Japan as Number One,” published in 1979, which had a major impact on Americans' view of Japan.

Christina Davis, director of the Program on U.S.-Japan Relations at Harvard University, announced his death.

She said that Vogel recently underwent an operation but had a poor prognosis and passed away.

In his book “Japan as Number One,” he said that the spectacular economic growth of postwar Japan was attributable to Japanese eagerness for learning and Japanese-style management. He also said that the United States could learn from Japan's example.

Vogel became director of Harvard’s East Asia Research Center in 1973 and in 1980, he became the first director of the newly established Program on U.S.-Japan Relations at the university.

In 1993, he took a position as the national intelligence officer for East Asia under the administration of U.S. President Bill Clinton.

Vogel was also a well-known expert on China and researched former Chinese leader Deng Xiaoping, who advocated reforms and an open-door policy in China, for more than 10 years and wrote the book, “Deng Xiaoping and the Transformation of China.”

Vogel had remained in good health until the operation and joined an online panel discussion in November, titled East Asia Responds to U.S. Election Results.

In the discussion, he said, “Japan will remain firm with the United States in security because of the threat of China, but it will find ways to work with China. Japan has a leadership role to play. That’s bigger than it has before.”

At the same time, in the same discussion, he was concerned about the worsening relationship between Japan and South Korea.

“South Korea has such a difficult role to play now, trying to get better relations with Japan," Vogel said. "I think it’s something that the South Koreans and Japanese have to do a lot of work.”

In 2014, in an interview with The Asahi Shimbun, he talked about the Japanese perception toward its own history.

“From my perspective, many Japanese feel that what was bad was militarism and that ordinary Japanese did not do anything bad, but were, in fact, the victims,” Vogel said. “But from the eyes of foreigners, there is a decisive lack of awareness among the Japanese that they were the aggressors with respect to neighboring nations.”