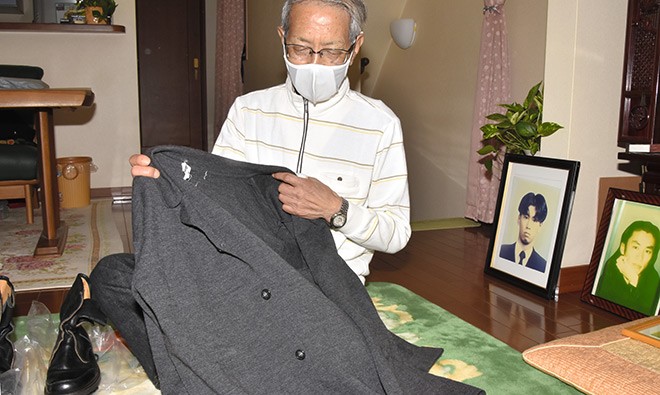 Kunisaburo Kobayashi holds a jacket worn by his son, Satoru, on the day he was attacked in 1996, at his home in Kasukabe, Saitama Prefecture, on Dec. 10. (Emi Iwata)

Tokyo police sent a murder case to prosecutors without naming a suspect, a procedure that officially wraps up the investigation and ends the long, determined but ultimately failed quest for justice by the victim’s father.

It is unusual for police to terminate a murder investigation since there is now no statute of limitations on the crime.

However, it was the father himself who asked for the end to the probe.

“They can’t continue investigating forever. They have done enough,” Kunisaburo Kobayashi, 75, said after the papers were sent to prosecutors on Dec. 11. “I feel empty at heart, but I thought it would be good for society.”

Kobayashi had taken extraordinary measures, including leaving his job, to search for his son’s killer and battle time constraints on the investigation.

The incident occurred on April 11, 1996. Satoru Kobayashi, then a 21-year-old senior at Rikkyo University from Kasukabe, Saitama Prefecture, was knocked down by a man during a quarrel on a Yamanote Line platform at JR Ikebukuro Station in Tokyo.

When Kobayashi saw Satoru’s body at a hospital, he said he felt that his son, whose pupils were dilated, was telling him to do something.

Kobayashi pledged to devote himself to finding justice for Satoru and thought that he could mourn the soul of his son by making his family strong.

Kobayashi started asking the public at the station for information two weeks after the incident.

He reminded himself not to succumb to sorrow and distress and to never forget the bitterness he felt. He distributed handmade fliers with tears streaming down his face.

At the time, the statute of limitations for the crime of inflicting injuries resulting in death was seven years. For murder, it was 15 years. The big difference between the two crimes is that murder carries the intention to kill.

But Kobayashi thought the only person who would know about “intention” was the perpetrator.

Flipping through “Roppo Zensho” (A compendium of laws) used by Satoru at the university, the father saw no reason for police to investigate the case on the lesser charge. He said he felt deeply upset about “inequality before the law.”

As he handed out the fliers, he explained the reality of the situation to passers-by.

“I thought I could leave traces of my son’s life by changing society for the better, even if only slightly,” Kobayashi recalled.

He submitted a petition signed by 35,000 people at Ikebukuro Station and elsewhere to the Justice Ministry in July 2002. In March 2003, one month before the statute of limitations was to expire, the MPD revised the charge to murder.

The statute of limitations for murder was abolished in 2010, when the Criminal Procedure Law was revised.

But Kobayashi couldn’t appreciate the change because he felt it was unfair to the families of victims of crimes whose statutes of limitations had expired before the revision.

“There are bereaved families who can be saved and others who can’t be,” Kobayashi said. “It’s not doing any good for society.”

Sticking to his belief in attaining equality before the law, Kobayashi stopped distributing fliers after April 11, 2012. He visited the National Police Agency five days later, on the anniversary of Satoru’s death, to ask for the termination of the investigation.

He wanted the police to concentrate their limited manpower and budget on other cases.

In early December, eight and a half years after the request, Satoru’s personal items were returned to his family. Kobayashi felt a heart-wrenching pain as he looked at the shiny navy blue shirt and gray jacket worn by his son on that day.

He also found the faded word “Ikebukuro” on a JR ticket purchased by Satoru.

The father said he intends to keep making recommendations on the legal system and other matters.

The MPD said it will “continue investigations” by asking the public for information and making other efforts.