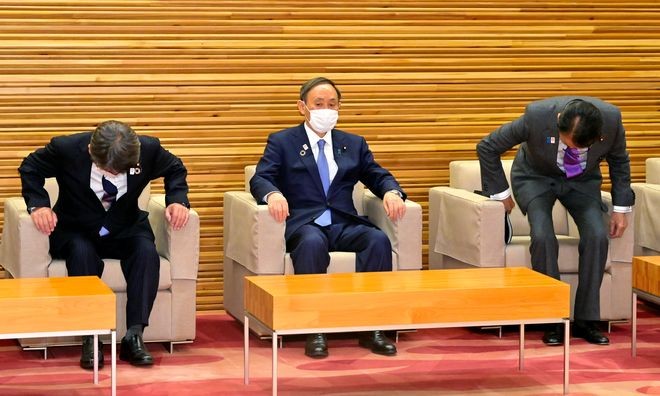 The draft budget for fiscal 2021, formally approved by the Cabinet on Dec. 21, and the third supplementary budget for the current fiscal year announced last week, leave little doubt that the government has tossed fiscal discipline out the window.

At first glance, the 106.6 trillion yen ($1.030 trillion) spending plan does not seem to signal unruly fiscal expansion. Subtract 5 trillion yen of contingency funds for possible additional measures to deal with the new coronavirus pandemic, the sum would be some 1 trillion yen lower than the original budget for this fiscal year.

But this picture is deceptive since the government has effectively integrated the massive third extra budget for fiscal 2020 into its spending blueprint for the year that starts in April under a so-called “15-month budget” formula. Almost all the costs of the administration’s expensive pet projects will be paid from the supplementary funds.

The real picture is a surge of 16 trillion yen in government spending from the spending plan for the current fiscal year, which is also a “15-month budget.”

There is a compelling case for budgeting for reasonable pandemic-related expenditures, including spending to finance measures to stem the spread of COVID-19 cases and support closed businesses to prevent massive job losses.

Tucked in the supplementary budget, however, are a raft of projects and programs that have little to do with policy efforts to bring the outbreak under control.

The amount of spending to better prepare the nation for natural disasters over the next five years, for example, has been set at 15 trillion yen simply in line with the ruling coalition’s demand, not by adding up the price tags of necessary projects.

A new fund to support research at universities and young researchers will receive 4.5 trillion yen, but specifics about how the money should be used remain undecided.

Under the pretext of reducing the administrative work involved in budget requests amid the public health crisis, the ministries and agencies were allowed to ask for appropriations for these projects and programs without specifying the costs or how they were estimated.

It was deemed crucial to ensure transparency in the budgeting process, but all these outlays were approved with little public debate.

During behind-the-scenes budget negotiations between budget drafters at the Finance Ministry and lawmakers of the ruling Liberal Democratic Party, one LDP heavyweight twisted the officials’ arms. The heavyweight asked why the project he was promoting should not be financed after the government had spent over 10 trillion yen on a program to dole out 100,000 yen in cash to every resident in Japan.

Both the administration and the ruling party appear to have become oblivious to the simple fact that government spending is financed by taxes and have lost all common sense in regard to money.

During the formulation of the budget to finance the reconstruction of areas devastated by the 2011 earthquake and tsunami, the program to freeze highway tolls, a signature policy initiative of the government led by the former Democratic Party of Japan, was scrapped, while salaries of central government employees were slashed.

In contrast, the administration of Prime Minister Yoshihide Suga has shown no solid commitment to restoring fiscal health by tackling the question of where to raise the necessary funds to finance all these programs and projects.

The third extra budget also contains 65 billion yen for measures to lure back foreign tourists to Japan despite poor prospects for recovery in inbound tourism. The draft budget for the next fiscal year would increase outlays for building roads under direct management of the national government even though the flow of people is expected to shrink.

Any policy offers benefits for at least some people. The government’s budget just grows uncontrollably if no attention is paid to financial viability.

The outstanding balance of government bonds is projected to near a staggering 1,000 trillion yen at the end of the next fiscal year in March 2022.

It is too irresponsible for the government to shift the burden to future generations by relying on the Bank of Japan’s unusual program to purchase huge amounts of government bonds for its reckless deficit financing.

The government’s fiscal reform goal of securing a primary balance surplus in fiscal 2025 has lost its relevance.

The most basic principle for compiling a national budget is that low-priority expenditures should be dropped while funds for necessary programs and projects should be secured.

If the government ignores this principle, there is no hope for recovery of fiscal health.