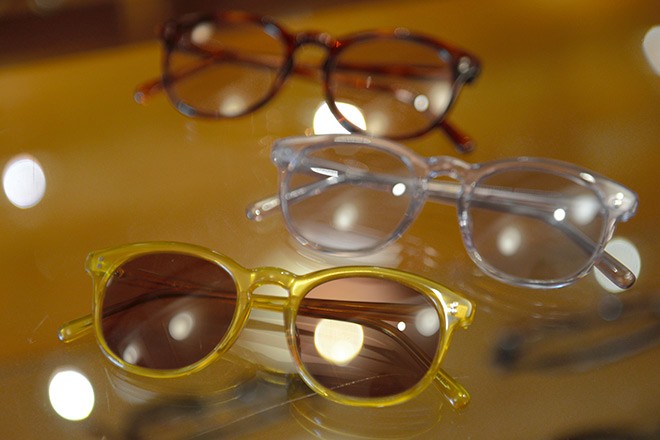 In August 1979, an extremely nervous Masami Shirayama took the elevator to the penthouse suite on the top floor of the plush Hotel Okura Tokyo with sample eyeglass frames he had designed.

He was on his way to meet John Lennon.

A few days earlier, a friend of Shirayama's who owned a boutique in the capital called to say that Lennon had just stopped by the shop and expressed an interest in trying on the frames.

On display at the boutique was the Mayfair brand of celluloid eyeglass frames that Shirayama, now 70, had designed.

Shirayama’s great-grandfather established the eyeglass company in 1883. Shirayama went against his father’s opposition to design his own frames, feeling it was the only way to establish a niche in a market being overrun by cheap products.

The original set came out in 1975 and Mayfair, which went on sale from 1978, was Shirayama’s fourth creation.

Lennon's celebrity status posed obvious difficulties for him in venturing out in public, so Shirayama and his friend agreed to meet the musician at the Tokyo hotel in the capital's Minato Ward.

Shirayama, a diehard Beatles fan, was overcome with excitement at the prospect of meeting Lennon who he had seen at the first concert given by the group in Japan at Tokyo's Nippon Budokan hall in 1966.

He brought 15 frames from his four original models.

After stepping out of the bedroom and making introductions, Lennon drank coffee and talked about music while he tried on the samples. He liked the Mayfair brand best and chose three frames in brown, yellow and transparent.

When Lennon tried on the final product on Aug. 24, he had one word for Shirayama, “Good.”

DECISION TO SCRAP THE MAYFAIR

On Dec. 8, 1980, Lennon was gunned down in the entranceway of his Dakota residence in New York.

Months later, Shirayama was stunned to come across a poster at a record shop in Tokyo’s Shibuya district depicting a clear Mayfair frame covered in blood.

The photo was used for the cover of Yoko Ono’s album “Season of Glass.”

Shirayama realized Lennon was wearing the Mayfair eyeglass on the night he was killed. Other photos of that day show him wearing the yellow frame while signing autographs.

Shirayama decided then and there to stop selling the Mayfair frame as he couldn't bear the thought of profiting from Lennon’s death.

He has no idea why Lennon liked his eyeglasses so much because the ones he saw in his hotel rooms were all metal-framed. Perhaps Lennon simply wanted something different, Shirayama surmises.

“He talked about resuming a concert tour from Tokyo, so I thought that there might come a time when he performed wearing the glasses,” Shirayama said.

When Shirayama realized a couple of years ago that a rival company was passing off their frames as the ones that Lennon so admired, he decided it was time to resume production of the Mayfair.

Shirayama was concerned that if he did nothing people would never be able to tell which frame Lennon favored.

But replicating the original Mayfair brand was no easy matter.

In the 40 years since he stopped producing it, celluloid had been replaced by acetate due to the ease of handling the material.

Shirayama was always chuffed that Lennon chose the Mayfair.

“There were many difficult periods in managing an eyeglass company, but what kept me going was the feeling of not wanting to shame the company name,” Shirayama said. “I have nothing but gratitude.”

The reproduced frames are on display at the various outlets of the Hakusan Megane company and Shirayama plans to sell a limited number every year after the Dec. 8 anniversary of Lennon's slaying. The first lot will go on sale from Jan. 9.