The Defense Ministry starts a drilling survey Dec. 21 off the coast of Mageshima island in Nishinoomote, Kagoshima Prefecture, to construct a base to replace a U.S. military training site on Iwoto island. (Eiji Hori) 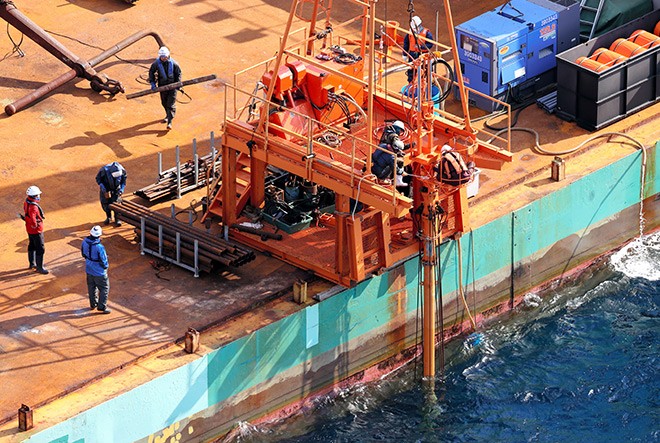 Workers on a vessel prepare for a drilling survey Dec. 21 in waters off Mageshima island in Nishinoomote, Kagoshima Prefecture, where the Defense Ministry plans to build a base to move a U.S. military training site. (Eiji Hori)

NISHINOOMOTE, Kagoshima Prefecture--The Defense Ministry on Dec. 21 started a drilling survey off Mageshima island here for a base as a replacement training site for U.S. carrier-based aircraft.

The survey to assess geological conditions of the island, which lies off Nishinoomote city, is scheduled to continue until the end of May. The results will be used to flesh out details for the base, such as the location and size of a planned port facility.

The initial work involved a vessel carrying heavy machinery to lower a steel pipe into waters off the uninhabited island to drill into the seafloor. The assessment work will be carried out at 37 locations off the east coast of the island.

Preparatory work got under way after the workers departed from nearby Tanegashima island on Dec. 18 at the behest of the ministry.

The project is aimed at establishing a Self-Defense Forces facility on Mageshima island to relocate the U.S. military’s landing practice site on Iwoto island, also known as Iwojima, south of Tokyo.

The ministry purchased most of the land needed for the training site.

The Kagoshima prefectural government, which has the authority to approve work for collecting soil and rock samples from the seabed in the area, granted the ministry permission to conduct the survey in November, citing a likely limited impact on local fisheries.

But Nishinoomote Mayor Shunsuke Yaita, 67, opposed construction of the proposed base and submitted a written opinion to the ministry to express his concerns.

“We cannot rule out the possibility that the survey could negatively impact the local fishing environment,” Yaita said in the document.

Local opinion is divided over the ministry’s project to build the base. Fishermen who operate in waters off Mageshima island filed lawsuits this month, seeking an injunction against the survey and the retraction of the prefectural government’s approval for the work.

It remains to be seen if the project will proceed as planned.

The ministry will soon start procedures to conduct an environmental assessment as well to measure noise levels caused by landing practices and the impact of construction work on the local environment.

The ministry expects to spend about two years to complete the study and roughly four years to construct the base. It has not disclosed when the construction work or exercises would begin on the island.