VOX POPULI: Applause music to the ears of artists sidelined by pandemic 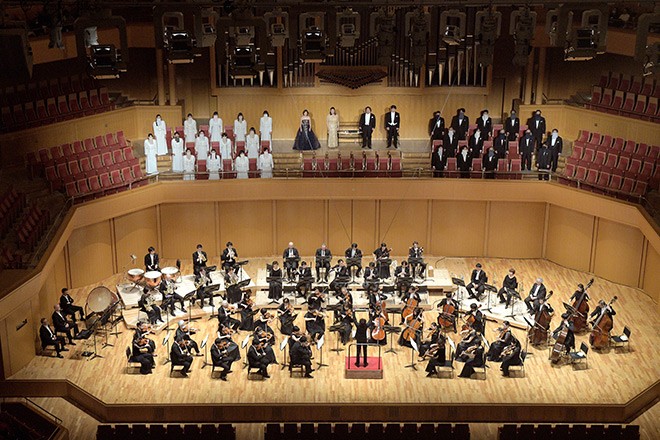 Choir members sing on a second floor behind the Nagoya Philharmonic Orchestra during a performance of Beethoven’s Symphony No. 9 in Nagoya on Dec. 18. (Photo taken by Kosaku Nakagawa)

Conductor Kentaro Kawase, 35, had an unforgettable experience this summer.

On the day he conducted an orchestra before an audience for the first time in months, he found himself listening intently to something he had long taken for granted, the “expressiveness” of the applause.

“I realized that the sound of applause is what I love to hear more than anything in the world,” Kawase said.

The classical music community faced a grave crisis this year. Kawase’s engagement calendar remained blank for five months, the longest he has ever been absent from the conductor’s podium.

As the novel coronavirus pandemic raged, he wondered if music was “non-essential.”

As the Nagoya Philharmonic Orchestra’s resident conductor, he had to make the tough call of whether or not to perform Beethoven’s Symphony No. 9 in December.

“The stage would be overcrowded with orchestra and choir members, about the worst situation you could have during the pandemic,” he said.

He held repeated discussions with those concerned, trying to figure out any way to hold the annual year-end event.

The concert did take place last weekend. Right before it, one of the performers was found to have been in close contact with someone who had tested positive for the virus and had to be replaced.

The choir, which always consisted of 200 members, was whittled down to just 28. They all stood on a second floor far from the audience and wore special long “singing masks” that covered them from mouth to chest.

According to a colleague of mine in the audience who covered the event, the applause that broke out when the performance ended went on for ages, with the entire audience of 1,200 expressing their joy by clapping their hands.

One person hoisted a banner saying “Bravo” instead of shouting it out, and the orchestra and the choir congratulated one another with applause as well.

Live music allows people to share the same space and abandon themselves to the same sounds.

“There’s no future for live concerts,” I have heard pessimists lament.

But musicians are returning, albeit slowly, to stages around the nation. And live applause is supporting live music.