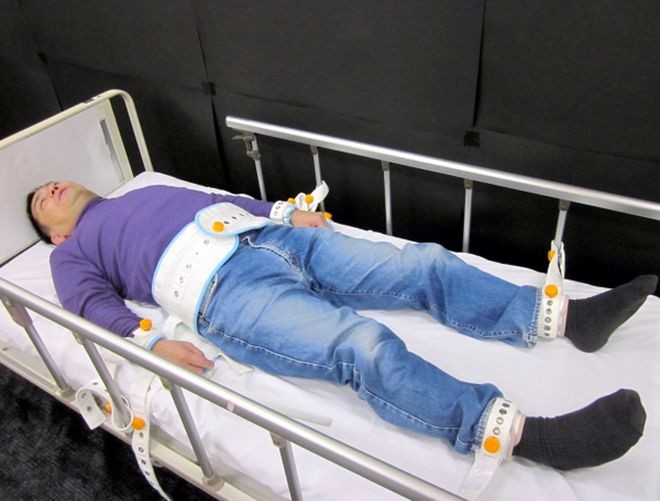 Toshio Hasegawa, a professor of psychiatry at Kyorin University, is held with special belts on a bed for research purposes. (From Toshio Hasegawa’s book “Seishinka Iryo no Kakuri/ Shintai Kosoku” published by Nippon Hyoron Sha Co.)

Patients undergoing treatment at psychiatric hospitals in Japan are physically restrained way more often than in other countries, an international survey reveals, a situation one of its lead authors slammed as "abnormal."

The ratio of patients tied down to their beds with special belts was 580 times higher in Japan than in Australia and 270 times higher than in the United States, joint research by Toshio Hasegawa, a professor of psychiatry at Japan’s Kyorin University, and his colleagues shows.

“The findings reconfirmed that mental health institutes in Japan resort to a kind of care heavily dependent on physical restraint,” Hasegawa said. “It should be recognized first of all that patients are abnormally frequently restrained compared with other states. This surely calls for a thorough review of the way patients are treated in Japan's psychiatric centers.”

The findings were published in the international psychiatric journal Epidemiology and Psychiatric Sciences.

Scientists in Japan, the United States, Australia and New Zealand examined available data from 2017 in each nation, and compared the number of patients physically restrained daily at psychiatric hospitals in those four countries.

Information on emotional health and welfare, released annually in Japan, revealed 98.8 patients per million of population were restrained on a daily basis.

Facilities for dementia patients were excluded from the estimate as Japan's practice of hospitalizing such cases differs from other nations.

In Australia, 0.17 patient per one million people were fastened to beds, according to the findings. In the United States, the rate was 0.37.

Though the survey did not precisely compare the same age groups, Japan was far ahead of New Zealand in restraining patients.

How often patients were restrained varied in different areas of each country that participated in the survey.

In Japan, the restraint ratio ranged from 16 to 244 patients, depending on the prefecture.

“Patients are so often physically restrained, though the number of psychiatrists per population is not so small compared with other countries,” Hasegawa said. “That's probably because the psychiatric centers have more beds than other nations, leading to more hospitalized patients.”

Under Japan's mental health and welfare law and other regulations, designated mental health doctors can resort to restraining patients if they recognize a possibility that patients will try to commit suicide or injure themselves, shows signs of hyperactivity and restlessness or a risk of the patient's life being endangered if nothing is done.

Use of the method is limited to when no other means are available.

The practice of restraining patients has been criticized for depriving the individuals of their freedom to move and damaging their dignity, leading many medical institutes to work toward finding other ways.

Still, there is a deep-rooted tendency among health care providers in Japan to regard the method as “essential to ensure safety,” citing a personnel shortage at medical centers and other reasons.

More than 10,000 patients were restrained so they could not move at psychiatric centers in Japan in 2019, according to a health ministry survey conducted at the end of June that year.