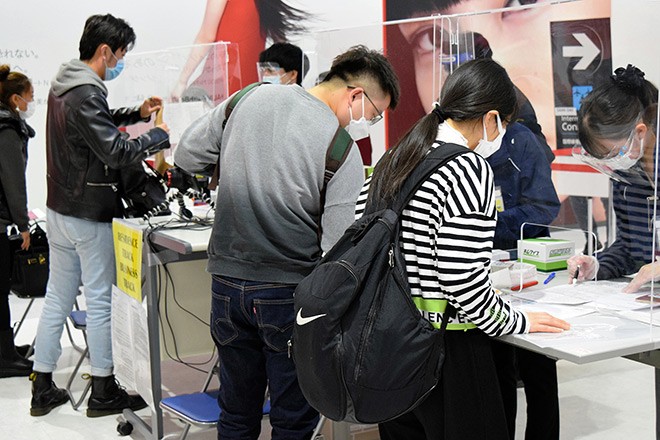 Quarantine officials at Narita Airport question arriving passengers to determine if they need to be tested for the novel coronavirus. (Asahi Shimbun file photo)

Japan will exclude Britain from its list of nations for whom entry restrictions were relaxed following the emergence of a new variant of the novel coronavirus.

Chief Cabinet Secretary Katsunobu Kato announced the measure at his Dec. 23 news conference and said steps being implemented from Dec. 24 would continue for the “time being.”

Appearing on a TV news program Dec. 21, Prime Minister Yoshihide Suga said there were no serious health concerns right now as only “one or two Japanese nationals residing in Britain have been returning daily.”

However, he said negotiations were being held with British officials about implementing stricter measures.

The government has implemented a ban on entry for nationals from about 150 nations and regions, including Britain, since the spread of COVID-19 from spring.

In the months following, entry restrictions have been gradually relaxed through an expansion of exceptions. Since October, for example, those planning to stay in Japan for more than three months have been allowed in as long as they self-quarantined for two weeks.

In November, Japanese making short business trips overseas as well as foreign residents with resident status returning to Japan were exempted from the self-isolation measure.

An entry ban continues for tourists and others planning short visits.

While the relaxed measures targeted all nations, the removal of Britain from the list means Japanese business travelers returning from Britain will have to self-isolate for two weeks, as will returning foreign residents.

Those arriving passengers will also have to certify a negative COVID-19 test result taken within 72 hours of leaving Britain and store GPS data about where they have been in Japan.

In addition, British citizens will not be allowed to enter Japan for medium- or long-term stays.

The World Health Organization has also reported finding the same new strain of the coronavirus in Denmark, the Netherlands, Italy and Australia.

However, those nations will not face the same measure as Britain because the number of cases has been much smaller, according to a government source.

Still, government officials will consider whether the measures targeting Britain should be expanded to other nations.