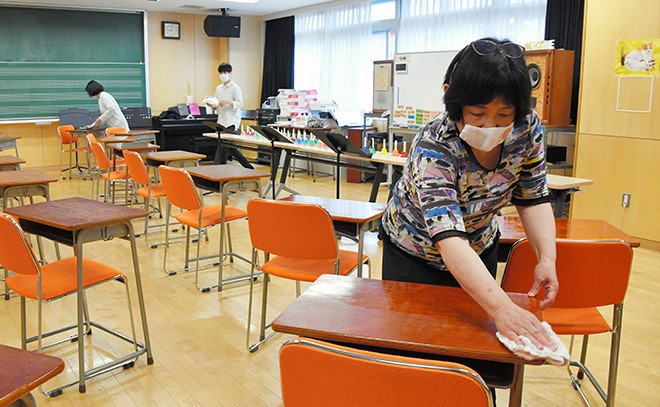 Teachers and staff sanitize tables and chairs in a classroom at a junior high school in Tokyo’s Setagaya Ward in June. (Asahi Shimbun file photo)

A record number of public school teachers took leaves of absence for mental illnesses in fiscal 2019 while a near-record number were disciplined for committing obscene acts against children, an education ministry survey showed.

The ministry also said disciplinary action was taken against 273 teachers and staff in fiscal 2019 for sexual harassment or obscene acts, nearing the record of 282 set in fiscal 2018.

Of the 273, 126 were disciplined for obscene acts on children, and 121 of them were dismissed from their jobs.

Overall, 153 educators lost their jobs because of their behavior.

Eighty-four of the 273 educators were disciplined for “touching bodies,” 49 “had sexual intercourse” and 33 used cameras for voyeurism or peeped, according to the survey.

Many of the incidents occurred at hotels or in classrooms and other rooms on the school campus.

The ministry said the trend is “extremely grave,” and it will consider implementing measures, such as banning teachers from having private conversations with students on social media, which have led to some of the cases.

The survey covered all 47 prefectures as well as 20 government-designated major cities.

To deal with the mental illness problem, the ministry said it will reform working practices by thoroughly managing work hours and setting up consulting service windows.

Educators have shouldered a heavier work burden while dealing with the novel coronavirus pandemic, the ministry said.

The ministry said it has received reports that many teachers have been forced to work overtime and must respond to excessive demands from parents.

According to the ministry, the workload has increased for teachers while the ministry’s curriculum guideline has become more complex.

In addition, teachers of the postwar baby-boom generation have begun retiring, putting young and middle-aged educators under more pressure.

The number of leaves of absences from public schools in fiscal 2019 was 266 more than in the previous fiscal year, and accounted for 0.59 percent of the number of teachers on duty, the second highest ratio recorded.

In fiscal 2019, 649 teachers and staff at special-needs schools, or a record high 0.72 percent of all staff members, took leaves of absence.

Okinawa Prefecture had the highest ratio of 1.24 percent, or 190, of educators taking time off among all prefectures and government-designated major cities, followed by Kawasaki with 1.05 percent, or 69 educators, Osaka’s 1.02 percent, or 133, and Kobe’s 0.98 percent, or 81.

Tokyo saw 633 educators take leaves of absence, while Yokohama had 161, both accounting for 0.97 percent.

(This article was written by Kazuyuki Ito and Yu Kamata.)