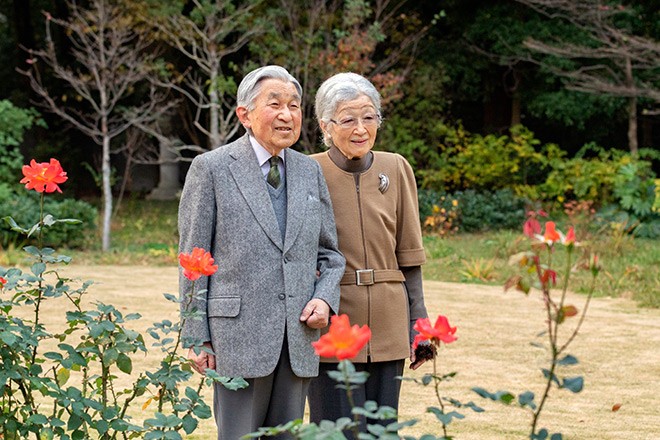 Emperor Emeritus Akihito, who turned 87 on Dec. 23, and Empress Emerita Michiko gaze at roses during a stroll in the garden of their residence on Nov. 24. (Provided by the Imperial Household Agency)

Emperor Emeritus Akihito marked his 87th birthday Dec. 23 expressing deep concern about the COVID-19 pandemic and the toll it is taking on people’s health and daily lives, the Imperial Household Agency said.

In retirement, Akihito visits the Biological Laboratory on the grounds of the Imperial Palace twice a week to continue his studies on goby fish, which he has pursued as his life's work, according to the agency.

Despite past health issues, it said he is currently in good health and sports a constant smile in the presence of Empress Emerita Michiko, though he asks her questions more frequently these days.

He appeared to be relieved that a series of ceremonial rituals related to the enthronement of his eldest son, Emperor Naruhito, have wound up, according to the agency. The rituals started following Akihito’s abdication in April 2019.

Akihito continues to take a daily stroll with Michiko and watches recorded TV programs documenting the lives of animals and plants, the agency said.

It added that he was worried when he learned that more than 2,000 motorists became stranded on the evening of Dec. 16 on the Kan-etsu Expressway linking Tokyo and Niigata Prefecture due to heavy snow.

Both he and Michiko were relieved at news reports on a rescue mission clearing the snow so all the vehicles could get off the expressway, according to the agency.

Akihito is also concerned about the pandemic disrupting the activities of the Japan Overseas Cooperation Volunteers (JOCV), Japan’s version of the U.S. Peace Corps, and the operations of Museu Historico da Imigracao Japonesa no Brasil, a museum in Sao Paulo themed on Japanese-Brazilians, the agency said.

Akihito and Michiko have supported the JOCV’s activities since its first overseas dispatch of members by meeting with them to give encouragement. The two also attended a ceremony marking the completion of the museum in 1978 during their visit to Brazil that year.