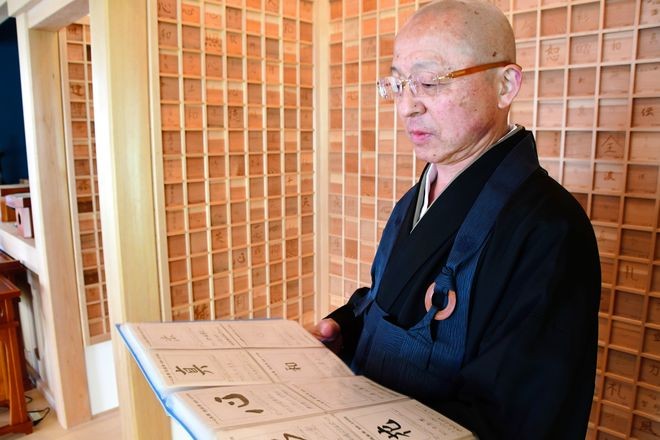 Bunmei Hayasaka views postcards sent from donors, each of which features a kanji character of their choice from a Buddhist sutra, at Tokusenji temple in Yamamoto, Miyagi Prefecture, on Dec. 2. (Chihito Shin)

YAMAMOTO, Miyagi Prefecture--A Buddhist temple dating from 1652 that sits just 300 meters from the shore, a designated danger zone, is celebrating its rebirth after being reduced to ruins.

Tokusenji temple in the Takase district here held a service to celebrate its reconstruction on March 11, 2020, the ninth anniversary of the earthquake and tsunami disaster that swept away the main hall. Seventy-four parishioners died in the March 11, 2011, event.

The temple was rebuilt with donations from 1,980 people, each of whom sent a postcard written with a kanji character of their choice from a Buddhist sutra.

The reconstructed temple also boasts a monument dedicated to the victims of the disaster. It stands next to the main hall and has become a place of prayer and contemplation for those who lost loved ones.

A Buddha statue, the temple's principal deity, inside the reconstructed main hall is surrounded by screens, embedded with 2,000 or so small cedar plates.

Each plate is written with a kanji character such as "shin" (heart), "toku" (virtue) or "ai" (love). The characters represent people's wishes for the recovery of Tokusenji and the disaster-affected areas, according to head priest Bunmei Hayasaka, 70.

He also serves as head priest at Tokuhonji, which is located inland and was spared the ravages of the towering tsunami generated by the magnitude-9.0 Great East Japan Earthquake.

On March 11, 2011, parishioners from "danka" families that support Tokusenji temple gathered to engage in cleaning duties when the building started shaking violently.

A parishioner who turned on a car radio to find out what was going on became alarmed on hearing that a six-meter tsunami was heading their way.

The congregation couldn't believe what they were hearing as none of them had ever heard of a seismic wave that size. Even so, they evacuated from the area as fast as they could. Hayasaka returned to Tokuhonji.

The priest gradually learned that some of the parishioners were missing while others had sought refuge in shelters. All he could do was pray for their safety.

Several days later, the bodies of the missing began to be found. In total, 74 of the parishioners of Tokusenji perished.

Hayasaka was struck by how pitiful it must have been for the victims, given that they could never have anticipated their fate later that day. He continued offering prayers for the deceased while handing out relief supplies collected at Tokuhonji to shelters in the town.

About one month after the earthquake, the principal deity was found washed up about two kilometers from the Tokusenji. Hayasaka figured it survived the tsunami with its single-minded eagerness to save people and named the statue "Isshin-Honzon" (single-minded principal deity).

Hayasaka considered rebuilding the temple to enshrine the Honzon at an appropriate spot but felt he couldn't ask his parishioners to offer donations so soon after the disaster. Instead, he decided to call for support from across the country.

He came up with an initiative called "Hagaki Hitomoji Shakyo" (transcribed sutra of postcards with one character for each) to ask people to write a kanji character of their choice from a sutra on a postcard and send it with 5,000 yen ($48) in fees in exchange for a service to dedicate the postcard to the temple. The idea was to get donors think about the disaster-stricken areas when they choose the kanji.

The effort was covered by The Asahi Shimbun and other mass media before donations poured in from across the country.

The most popular kanji was "shin" for heart or mind.

"I think many people naturally chose it as a character that can be infused with a prayer for reconstruction," Hayasaka said.

He had received 1,980 postcards in total by spring 2020. Some people sent only the fee. Still, he raised 38.91 million yen in donations. Hayasaka also received support from other temples to rebuild Tokusenji.

He still receives postcards from time to time.

"I'm grateful to people across the country for their support," Hayasaka said.

It made him realize yet again that small acts can lead to big things when people try and work together.

The priest chants a sutra each morning to pray for the souls of the disaster victims.

"I want people to see the temple and the town that have recovered this far. And remember that earthquake."