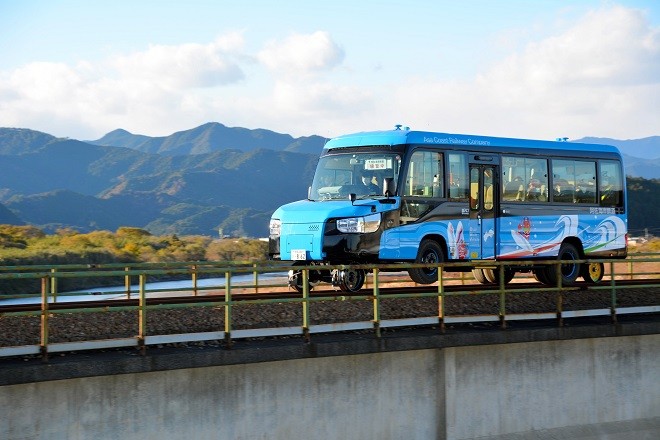 KAIYO, Tokushima Prefecture--Asa Seaside Railway Corp. has conducted its first test of a dual-mode vehicle (DMV) capable of running on both railway tracks and paved roads.

The Kaiyo-based semi-public company, which operates railway lines in Tokushima and Kochi prefectures, tested the commercial DMV on the Asato Line on Dec. 15.

During the test, Asa Seaside Railway’s DMV shifted from “bus mode” to “train mode” at the “mode interchange” facility newly installed at Awa-Kainan Station in Kaiyo. In about 15 seconds, a pair of wheels appeared under the front and rear of the vehicle body to touch the rails, lifting the rubber tires at the front.

On the railway tracks, the vehicle ran at a speed of 30 kph on six wheels, including two rubber tires at the rear and two pairs of iron wheels, over about 1.2 kilometers from Awa-Kainan Station.

The slow speed was maintained to ensure the controlling functions worked properly.

The company intends to start DMV operations in fiscal 2021, which starts in April, after performance testing and driver training.

The Asato Line is currently undergoing construction to introduce the DMV. The railway operator is offering a bus service along the line.

“It feels like riding an attraction at an amusement park when you experience the DMV’s acceleration,” said Toyoki Ihara, managing director of Asa Seaside Railway. “The success of the DMV depends on whether we can prepare well enough to satisfy passengers, so we’re putting our hearts and souls into it.”

The DMV will operate in train mode for 10 km between Awa-Kainan Station and Kannoura Station in Toyo, Kochi Prefecture. The vehicle will use bus mode to travel directly to Cape Muroto in Muroto, Kochi Prefecture, and other sightseeing spots on weekends and holidays.