Aide, not Abe, given summary indictment over banquet funds 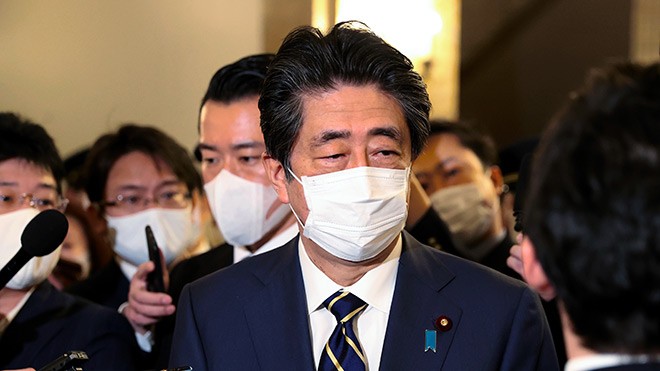 The top aide to former Prime Minister Shinzo Abe was given a summary indictment on Dec. 24 over unreported payments for lavish hotel receptions held in Tokyo for the politician’s supporters.

Hiroyuki Haikawa, 61, who heads a support group for Abe, is suspected of failing to list payments totaling about 30.22 million yen ($292,000) in the organization’s annual political fund reports.

Tokyo prosecutors filed the summary indictment against Haikawa at the Tokyo Summary Court.

But they did not indict Abe because of insufficient evidence that he was involved in the matter, according to sources.

A citizens’ group had filed a criminal complaint against both Abe and his aides over the unreported payments for the banquets, which were held on the eve of annual cherry blossom viewing parties in Tokyo hosted by Abe.

With the decision to not indict the former prime minister, the ruling coalition and opposition parties agreed to have Abe appear in the Diet on Dec. 25 to explain himself.

A session of the Lower House Rules and Administration Committee open to the media will be held from 1 p.m. on Dec. 25 for questioning Abe for about one hour. A similar session in the Upper House will be held later that day.

As prime minister, Abe had said in the Diet that his side never paid anything for the dinner parties, and that the hotels did not issue receipts. Those statements recently proved false.

Abe held a news conference later on Dec. 24 in which he offered his deepest apologies to the public and fellow lawmakers for making comments in the Diet that were not based on facts.

“While those accounting procedures were conducted without my knowledge, I seriously feel a moral responsibility,” Abe said. “Along with holding a deepfelt regret, I would also like to apologize to the public.”

He added that his responses to Diet questioning over the banquets were based on what he had been told by his aides.

Also on Dec. 24, Abe sent letters to the speaker of the Lower House and president of the Upper House asking for the opportunity to revise his past Diet statements.

Opposition lawmakers have long called for Abe to respond to questioning in the Diet because they say he lied during past Diet deliberations.

Lawmakers with the ruling Liberal Democratic Party initially wanted a closed-door session where Abe could respond to questions, but the opposition insisted that Abe testify in open and under oath so that any falsehoods could result in perjury charges.

Discussions between the two sides continued on Dec. 24 to determine what venue would be used.

While the LDP has apparently moved away from a closed-door session, the party appears reluctant to have Abe appear before the Diet as a sworn witness.

The summary indictment against Haikawa means he will not have to face a formal court trial.

Prosecutors likely made that decision because Haikawa had acknowledged not reporting the payments and also because the amount was not very large.