The legend of ‘Monster Wolf,’ savior of crops, spreads overseas

The Monster Wolf robot developed in Hokkaido has gained international attention for its ability to scare off bears and other animals that could damage crops. (Video taken by Hiraku Toda; additional footage provided by Ohta Seiki Co.) 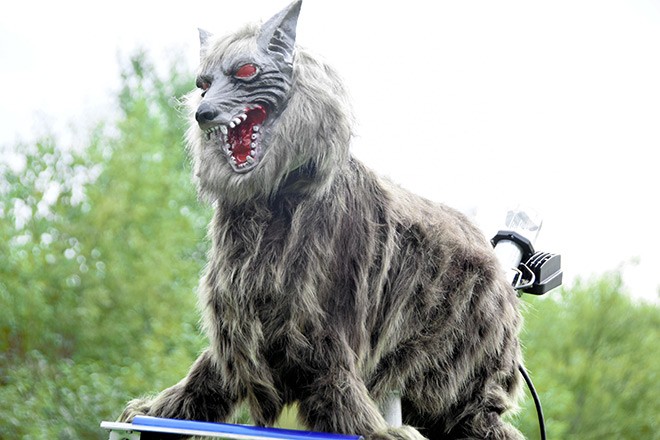 A Monster Wolf set up in Takikawa, Hokkaido, in September has a head created in the image of a werewolf mask. (Provided by the Takikawa city government)

NAIE, Hokkaido--A red-eyed, snarling werewolf here has attracted international attention from farmers whose scarecrows are just not doing the job.

“Monster Wolf,” a robot with a werewolf head, can emit a variety of loud sounds and strong flashes that are scary enough to drive away deer, wild boars and even bears from farmers’ crops.

Its developer, Ohta Seiki Co., has been flooded with inquiries from around Japan and overseas since a video of the robot, filmed in Hokkaido, was posted online by a foreign media outlet.

“We will further improve the Monster Wolf’s performance so it will serve as a guardian for agricultural fields,” said Yuji Ota, 62, president of Ohta Seiki.

Takikawa city, about 90 kilometers northeast of Sapporo, quickly installed the robot after brown bears were reported at two locations near residential zones in September and October.

Ohta Seiki, a small manufacturer in Naie town, 20 km from Takikawa, normally makes metal components. But it used waterproof fake fur to cover Monster Wolf’s 120-centimeter-long body and created the head from an image of a werewolf mask.

“I did not know much about wolves, so considerable parts of the design are based on my imagination,” Ota said.

Wolves (and likely lycanthropes) are believed to have gone extinct in Japan long ago.

Perhaps the unfamiliarity of wolves in the wild led to the success of Monster Wolf. No sightings of brown bears have been confirmed since the robot was introduced at the two sites in Takikawa, including a blueberry field.

“Although we do not have scientific evidence, the fact is that bears have not shown up in surrounding areas,” said an official of the municipality’s life support division. “Residents tell us they want Monster Wolf to continue operating permanently.”

Monster Wolf’s “weapons” are its glittering red eyes incorporating LEDs, a whitish blue light from around its legs and tail, and a speaker underneath its belly.

If the robot’s infrared sensor detects movement within a 20-meter range and 120 degrees in front, the LEDs, the speaker and the motor to swing the head start operating.

The speaker can produce at least 62 sounds, such as a monster-like roar, howling from an actual wolf, sound effects from a video game, and a man shouting, “I will never forgive you.”

Ota explained why so many noises were included.

“Animals soon get accustomed to the sounds if they hear only a few patterns,” he said.

The maximum sound level is 90 decibels, equivalent to the noise beneath the track of a passing train, and it can be heard up to 1.5 km away.

“One Monster Wolf can cover 4 to 5 hectares,” Ota said.

The price ranges from 450,000 yen ($4,350) to 550,000 yen, depending on its specifications. Seventy of the robots have been sold since its release in 2016, mainly to farmers from Hokkaido to Okinawa Prefecture struggling with pests.

After Reuters reported on Takikawa’s endeavor with a Monster Wolf video taken elsewhere in Hokkaido in November, other correspondents from overseas media outlets filed their own reports about the robot.

The story was introduced in English, Chinese, European languages, Hindi and Korean.
Ota recently made a remote appearance on a TV show in Brazil.

Ohta Seiki has received emails from an individual having a hard time with grizzly bears in Alaska and a European trying to drive away wild boars that raid grape fields.

“I have become aware that anti-vermin measures are seen as a problem not only in Japan but also in other parts of the world,” Ota said.

He said he will apply for an international patent with an eye on expanding the sales network outside Japan.