Helmet found at Kyoto shrine thought to be Mongol invader’s 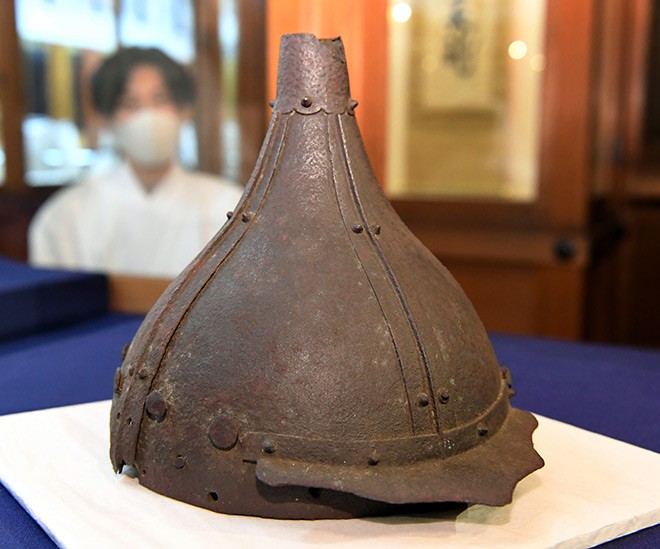 An iron helmet that a Mongol warrior apparently wore when Kublai Khan invaded Japan during the 13th century was discovered at Kitano Tenmangu shrine in Kyoto. (Kenta Sujino)

KYOTO--An iron helmet believed worn by a Mongol warrior during a 13th-century invasion of Japan has turned up at a shrine here, which prayed for the nation’s victory.

The cone-shaped headgear was discovered in an “azekura-style” storehouse within the precincts of Kitano Tenmangu shrine here in November.

The helmet, which measures 22 centimeters in height and 23 cm in diameter, weighs about 2 kilograms.

It was apparently donated to commemorate Japan’s defeat of fleets from the Yuan Dynasty, which ruled present-day Mongolia, China and other regions between 1271 and 1368, shrine officials said in December.

The dynasty was established by Kublai Khan, a grandson of Genghis Khan, who founded the Mongol Empire.

Kublai twice attempted to invade Japan during the Kamakura Period (1185-1333). Japanese and Mongol forces fought the Battle of Bunei in 1274 and the Battle of Koan in 1281 in northern Kyushu.

The helmet found at Kitano Tenmangu is thought to be from the Mongol side due to its close resemblance with the Kurourushinuri Kawabari Kabutobachi (black-lacquered, leather-treated helmet), a government-designated important cultural property.

The celebrated iron headpiece is believed to have been dedicated to Oyamazumijinja shrine in what is now Imabari, Ehime Prefecture, by Kono Michiari, who led a navy from the Seto Inland Sea area during the Battle of Koan.

Kublai repeatedly demanded Japan become a tributary state to his dynasty, but the Kamakura Shogunate refused. It is believed that the Yuan Dynasty abandoned both attempts partly due to a storm, which is often called “divine wind.”

It remains a mystery which battle the helmet was used in or how it ended up at Kitano Tenmangu.

Sugawara no Michizane (845-903), who is enshrined as a deity at the shrine, was respected as a god of war, who was believed to cause a divine wind to destroy enemies.

Japan’s imperial government in 1268 asked 22 shrines, including Kitano Tenmangu, to pray for a victory in preparation for a war against Mongols, according to records.

The helmet will be on display at the shrine’s treasure hall through Jan. 11 and also from Feb. 1 to March 14.