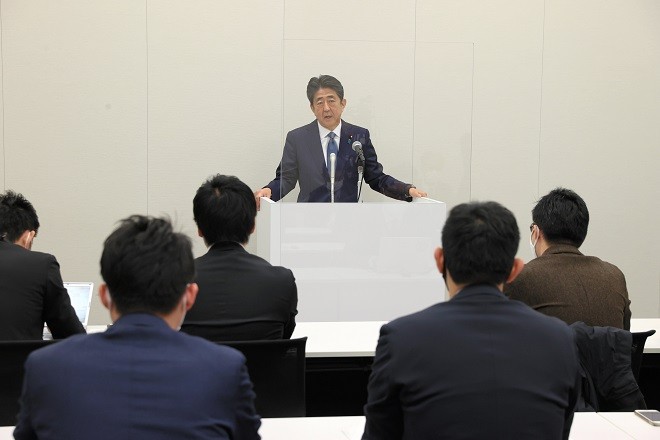 Former Prime Minister Shinzo Abe speaks to reporters at a news conference in the Diet building on Dec. 24. (Koichi Ueda)

Prosecutors decided not to indict former Prime Minister Shinzo Abe over payments for Tokyo hotel banquets to entertain supporters in his electoral district but brought in a summary indictment against Abe’s top government-paid secretary.

The aide was indicted for failing to report expenses to partly finance the banquets held on the eves of annual cherry blossom-viewing parties hosted by the prime minister.

This constitutes a violation of the political funds control law, according to the Tokyo District Public Prosecutors Office.

Even if he was not prosecuted, Abe is facing serious issues concerning his political integrity, given that his close aide, the first of his secretaries whose salaries are paid from public funds, is accused of a crime related to Abe’s own political activities while he was prime minister.

Many of the politicians who faced similar situations in the past resigned from key party or government posts or as a Diet member. Abe bears grave political and ethical responsibility for the matter.

The special investigation team of the prosecutors office, which is in charge of investigating major political scandals, questioned Abe over the allegations. However, it decided against bringing a criminal charge against him since it found no evidence of his direct involvement in the use of political funds to pay part of the bills for the parties.

Many Japanese, however, probably do not feel satisfied with the prosecutors’ decision.

Abe’s political funds report for 2019, one of those recognized by prosecutors as failing to report the expenses in question, was compiled and submitted to the authorities after opposition lawmakers started asking questions about the matter at the Diet.

As a lawmaker, Abe should have checked with the people involved about the allegations and reviewed the report himself.

If Abe did not take these steps, he is guilty of making a complete mockery of the Diet and the people.

Various factors are involved in the decision on whether to prosecute him, including the amounts of money paid and judicial actions taken in similar past cases. But there seems to be a solid case for indicting Abe at least over the legally flawed political funds report for 2019.

A criminal complaint was also filed against Abe and his aides by people who argued that the payments violated the public offices election law, which bans politicians from making donations in their electoral districts.

But the prosecutors indicted neither Abe nor his aide over this allegation. They apparently decided that the participants did not feel they were receiving benefits that outvalued the fees they paid for the parties, a fact which the prosecutors thought weighed against accusing the two persons of violating the law.

But the revelations at least made it clear that the connection with the office of Abe’s supporter group offered certain benefits, including invitations to the taxpayer-financed cherry blossom-viewing events.

This scandal has delivered an additional blow to public trust in politics, which had been damaged by the scandals involving two school operators linked directly and indirectly to Abe--Moritomo Gakuen and Kake Educational Institution. The sin is a serious one.

We also do not feel satisfied with the prosecutors’ decision to file only a summary indictment against Abe’s top aide, which means he will not have to face a formal court trial, and the way the Tokyo Summary Court immediately issued a summary order and fined the aide 1 million yen ($9,600).

Given the person’s official position and strong public interest in the case, he should have faced a formal court trial.

Why did the aide not report the expenses? If Abe really did not know about this, why did he fail to make sure that the spending would be reported after the allegations emerged?

How was the money to partly finance the banquets raised? What kind of compliance system does Abe's office utilize?

The public has been robbed of an opportunity to hear the accused answer all these and other important questions.

Abe held a news conference after the prosecutors decided not to indict him. His remarks there raised some new questions about his office’s management of funds, which apparently include Abe’s personal money.

The focus of public attention is now on Abe’s responses to questions about the matter in a special Diet session to be held on Dec. 25. His answers will show the level of his sincerity in his words and actions.