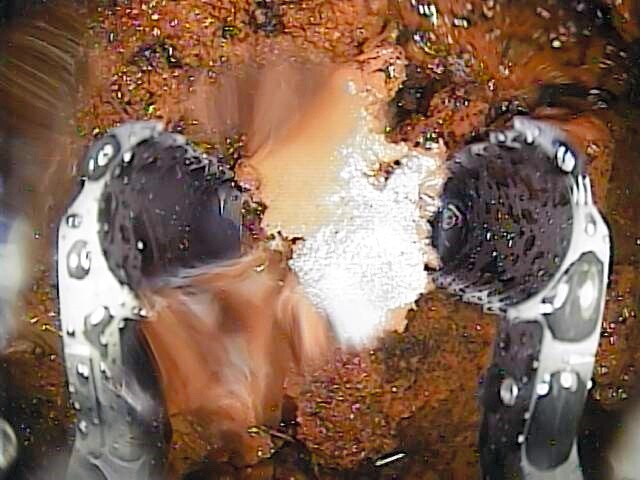 Special equipment catches small stone-like sediment, believed to be fuel debris, center, inside the No. 2 reactor’s containment vessel at the Fukushima No. 1 nuclear power plant in February 2019. (Provided by Tokyo Electric Power Co.)

The government and operator of the Fukushima No. 1 nuclear power plant announced they had abandoned plans to start removing melted nuclear fuel and other contaminated debris from the stricken facility within 2021, citing delayed development in Britain of a robotic arm crucial for the purpose.

They explained that the novel coronavirus pandemic was chiefly to blame for the delay.

The government and Tokyo Electric Power Co. had planned to start the hazardous task in 2021 but said Dec. 24 that is no longer feasible.

In December 2011, nine months after the triple meltdown triggered by the March earthquake and tsunami disaster, the two parties set a goal of starting to retrieve the melted fuel “within 10 years” so reactor decommissioning could start.

Since then, they have had to downsize the scale of debris that can be realistically be retrieved, mainly because the technology does not exist to accomplish such dangerous work.

The No. 2 reactor, along with the No. 1 and No. 3 reactors, went into meltdown after tsunami generated by the 2011 Great East Japan Earthquake knocked out cooling systems at the plant.

Debris retrieval constitutes the biggest obstacles to deciding how reactor decommissioning will progress in the years ahead.

The debris is emitting extremely high levels of radiation, making it difficult to access the site even with robots. Little is known about the state of the debris or its composition.

The government and TEPCO revised the timetable last December with the aim of retrieving a few grams of debris on an experimental basis in 2021 from the No. 2 reactor. The No. 2 reactor was chosen because the state of the containment housing is better understood than for the other reactors.

Japan approached Britain to develop a special robotic arm because it has more experience in this field.

But the work has experienced significant delays because of the COVID-19 pandemic. Trial tests for the robotic arm are planned to be held in Japan next spring or later with retrieval work postponed to 2022 or later.

However, many questions remain about the reactor decommissioning of the Fukushima No. 1 nuclear power plant as a whole due to a number of factors such as wrecked equipment at the site.

For example, initial projections to complete the removal of used nuclear fuel from a fuel pool were delayed for 10 years.

However, the government and TEPCO are sticking to their schedule to complete reactor decommissioning between 2041 and 2051. With regard to debris retrieval, this is to be done on a “step-by-step” basis.

The two parties on Dec. 24 also announced they will postpone the start of probing the interior of the No.1 reactor’s containment vessel from the second half of fiscal 2020 to fiscal 2021.

They have been working to secure a route that will allow robotic equipment to explore the interior but experienced huge hurdles because their current method caused radioactive substances to spread.

The accumulated debris in the three reactors is estimated to total about 880 tons.

Tentative plans call for increasing the amount of debris to be retrieved gradually after a few grams are collected with a metallic brush attached to the top of the robotic arm and analyzed.