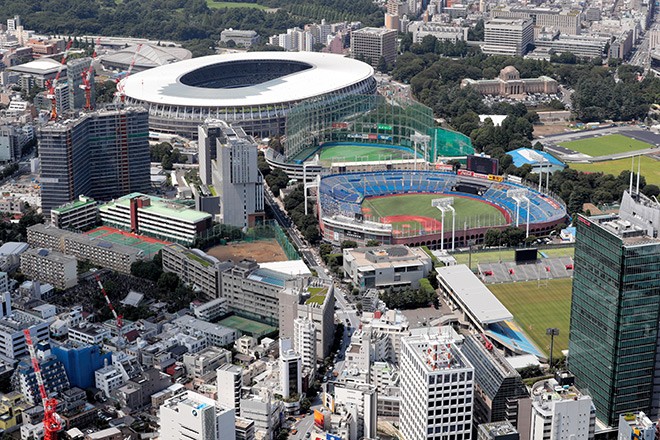 In the future, rugby fans in Tokyo won't have to brave the cold, rain or even snowfall to cheer on their favorites.

Instead, they can chill out in a new fully enclosed stadium that will replace Prince Chichibu Memorial Rugby Ground, known as Chichibunomiya, which will have a fixed roof to accommodate all weather conditions.

Officials of the sports ministry and the Japan Rugby Football Union, along with the stadium’s landowner, the Japan Sport Council, have agreed on the design at a closed-door meeting.

The stadium in Tokyo’s Minato Ward, which opened in 1947 and has hosted many storied rugby matches, is scheduled for demolition and replacement after the Tokyo Olympics next summer.

Officials earlier announced that the new stadium would follow international standards with a roof over the field and stands.

But they continued to discuss a design between a fully enclosed facility with a fixed roof, like Tokyo Dome, and a partially enclosed one, such as MetLife Dome in Saitama Prefecture, where spaces between the roof and stands are unwalled.

Officials have agreed the former is better because a fully enclosed stadium will readily attract non-sporting events such as concerts, making the venue more profitable.

Officials also believe a fully enclosed stadium offers more versatility to the public as it can be used as an evacuation facility in the event of a disaster.

The new stadium is expected to be modeled after The U Arena, a multi-use domed stadium that opened in the suburbs of Paris in 2017.

The new stadium will retain the same name, but will have a synthetic turf pitch instead of the current natural grass field.

The project is expected to double the cost of the initial budget of about 20 billion yen ($193 million) or even more. It will be funded by private investment.

The capital’s Jingu Gaien (outer garden) area, where Chichibunomiya and other sports venues such as the Meiji Jingu Stadium for baseball are located, has undergone a massive redevelopment.

The new National Stadium, which opened in December 2019 and will host the opening and closing ceremonies and major competitions of the Tokyo Olympic and Paralympic Games, is the main feature of the redevelopment plan named a “sports cluster.”

The project initially was expected to be completed by 2035. But with the Olympics being postponed until the summer of 2021 due to the novel coronavirus pandemic, a change in the construction schedule is inevitable.

The timing of demolition and building of these stadiums have been coordinated so both baseball and rugby seasons can continue without interruption.

However, building a fully enclosed stadium will likely push back the proposed 2026 completion of the new rugby stadium by about a year, and rugby matches for a certain period may have to be played elsewhere, officials said.

JRFU officials have urged the construction period to be shortened to avoid such a situation.

Officials of the three organizations have also agreed that the construction and operation of the new rugby stadium will be commissioned to a private company.