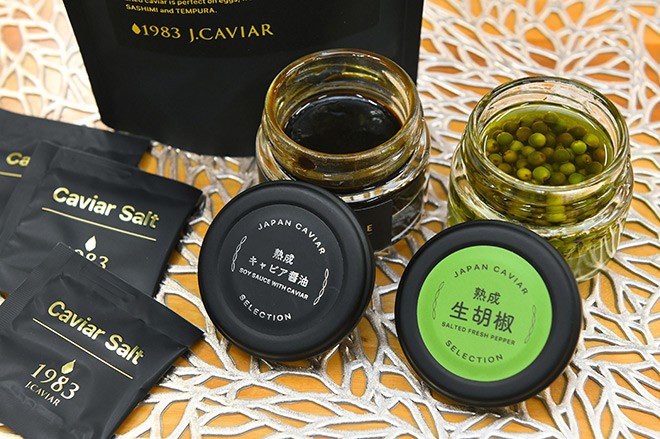 MIYAZAKI--A company here debuted what it hopes will be the creme de la creme of soy sauces--the world’s first made with caviar.

But those who want to try out Japan Caviar Inc.’s Caviar Soy Sauce on their sushi and sashimi shouldn’t sweat over shelling out for it.

“Our new processed products can make regular meals extra special when they’re used on days worth celebrating like the New Year holidays and at house parties,” Sakamoto told a news conference.

Sakamoto’s company produces caviar from sturgeon raised in Miyazaki Prefecture. The product is marketed under the Miyazaki Caviar 1983 brand because local farmers began growing sturgeon in 1983 through technical cooperation with the former Soviet Union.

The soy sauce is made from an aged mixture of caviar and soy sauce produced only from soybeans and salt using a traditional method.

The company says it is good for deep-fried dishes such as tempura. Sakamoto also recommended using it on baked potatoes with butter.

The company says it helps bring out the flavor of meat.

Japan Caviar is mainly selling the condiments on Rakuten, Amazon and other online outlets for the time being.