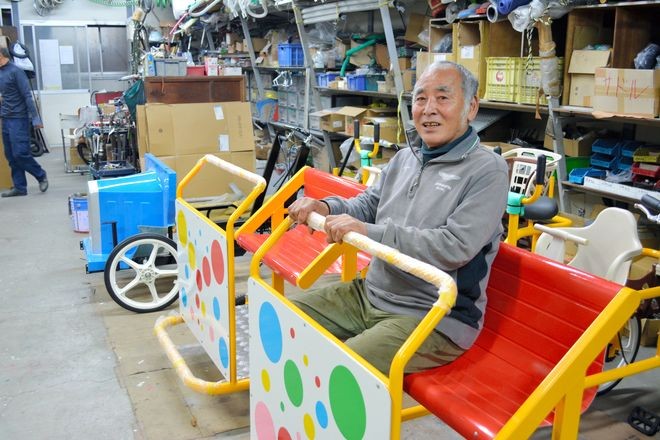 IZU, Shizuoka Prefecture--Strange bicycles shaped like animals or resembling engineering experiments gone wrong are familiar sights at amusement parks and tourist sites across Japan. But they all originate from just one location.

Their creator is Auto Craft Izu, which operates in a two-story factory near Shuzenji Station in Izu, a city famed for its onsen hot spring resort.

“We build bikes that make people want to ride them the moment they see them,” Katsunobu Takada, 75, the president and founder of the company, said as he pointed at a bicycle with the face of a yellow dog.

Takada, who has always been a car enthusiast, founded the company in 1985 and initially operated a factory for custom cars.

At the time, about 10 companies, mainly in the Kansai region, were in the same business, according to Takada. But with demand limited to theme parks and large parks, the competitors went out of business one after another. Eventually, Auto Craft Izu was the only manufacturer left in the market.

The company survived because it can perform various processes, ranging from welding iron pipes into frames to working on exterior designs.

“We started out as an auto factory. We had skills in exterior work and facilities of our own,” the president said.

Although its catalog lists about 40 models, the company has developed more than 500 over the past 35 years and continues to offer a few new versions each year.

The animal themes for the bicycles include pandas, rabbits, dolphins and dinosaurs. There are also vegetable motifs, such as cucumbers and eggplants.

Some bicycles are popular for their unorthodox movements. One model moves sideways like a crab, and another moves forward when the rider jumps on the step board.

He said he was once asked to sell unique bicycles in large quantities in China and elsewhere abroad, but he has remained cautious about exporting his products.

“It is difficult to do business with foreign countries. We decline their offers because we can’t make large investments,” he said.

Theme parks around the country have been hit hard by the new coronavirus pandemic. Auto Craft Izu’s revenue was halved in 2020 after it lost sales and lease deals with the park operators.

Takada said his company would be all right for the time being. But he fears that if worst comes to worst, the culture of unique bicycles could be lost from Japan.

“We feel a sense of responsibility to carry the burden of the whole genre,” the president said.