EDITORIAL: Abe must not be left off the hook but summoned to testify once again 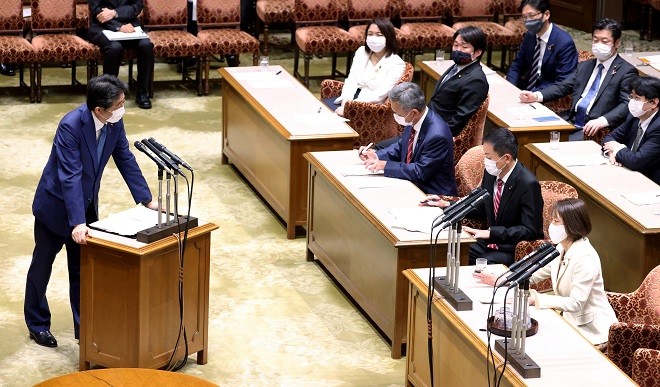 Former Prime Minister Shinzo Abe’s responses to questions over contentious financing of Tokyo hotel banquets held for supporters in his electoral district raised serious doubt about his awareness of how he deceived the Diet, the highest organ of state power, and violated the public's trust.

Abe’s explanations about alleged illegal payments to benefit voters in his constituency were far from convincing. He acknowledged his “ethical and political” responsibility, but did not come across as sincere.

Abe attended sessions of the Rule and Administration Committees of both houses on Dec. 25, held in response to his request for an opportunity to address his past false remarks about how the office of his local support group partly financed the banquets held on the eve of annual cherry blossom-viewing parties hosted by the prime minister.

Abe reiterated what he said in a Dec. 24 news conference, that he was not aware his top government-paid secretary used his political funds to pay for a portion of the expenses. The aide acted at his own discretion, according to Abe.

But he failed to answer key questions, such as why he accepted his aide’s words at face value and did not check more vigorously after the allegations came to light and he found himself under fierce opposition attack in the Diet.

Even though Abe claims he was not aware of facts, he made false remarks in the Diet for nearly a year. This is a matter that threatened the foundations of Japan's democracy.

Steps Abe promised to take with regard to his responsibility for the serious breach of public trust that may warrant his resignation as a lawmaker are all tepid measures, including efforts to inject transparency into the management of funds at his support group. These are basic obligations for all lawmakers and do not signal the kind of political pride we would expect of a former prime minister who held office longer than any other in the nation’s history of constitutional government.

Even though he himself asked for the opportunity to answer questions and put the matter to rest, Abe seemed to make no serious effort to uncover the facts about the office’s involvement, another sign of his insincere stance. He did not try to check the specifics of the expenses by asking the hotels to reissue detailed accounts, nor did he ask the secretary who first decided not to report the expenses his reasons for doing so.

This amounts to additional evidence of the Abe administration’s disregard for the government’s responsibility to explain its decisions and actions and willingness to lie to the Diet, if necessary. This tendency was underscored by the falsification and destruction of official documents related to the dubious sale of state-owned land to Moritomo Gakuen, a school operator linked to Abe’s wife, Akie.

After attending the Diet sessions on Dec. 25, Abe, speaking to reporters, declared he had fulfilled his responsibility to provide a full explanation.

Many lawmakers within the ruling Liberal Democratic Party, which fears that this issue could tarnish the current administration of Prime Minister Yoshihide Suga, Abe’s successor, are arguing that Abe’s appearances at the sessions should put an end to this issue. But public trust in politics cannot be regained unless more is done to uncover the truth.

It is vital to summon Abe to testify again before the regular Diet session convenes in January. Abe should be ordered to appear as a sworn witness who would be charged with perjury if he lies.

Abe also said he will run for the next Lower House election to seek a fresh public mandate to serve as a Diet member.

But he should realize he needs to clarify all the allegations against him if he wants to continue serving as a lawmaker.