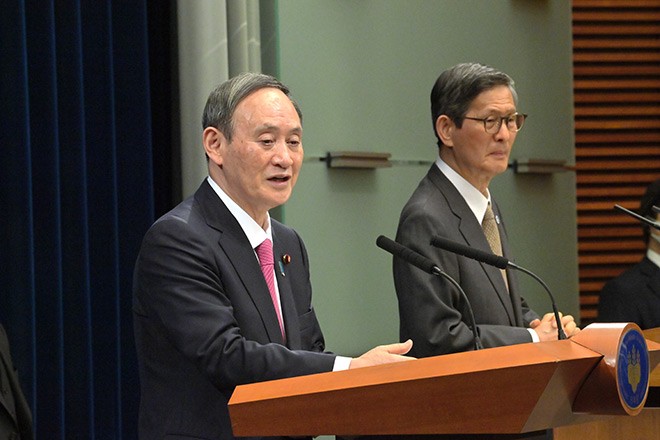 Prime Minister Yoshihide Suga, left, attends a news conference on Dec. 25 along with Shigeru Omi, the chairman of the government panel of experts dealing with the COVID-19 health crisis. (Kotaro Ebara)

Prime Minister Yoshihide Suga called on the nation to spend the year-end period quietly and refrain from traditional social activities as records for new COVID-19 cases become a daily occurrence.

“If nothing is done, we will not be able to avoid a further spread of infections,” Suga said Dec. 25 at his first news conference devoted to dealing with the health crisis since becoming prime minister in September. “I would like to ask the general public to spend a quiet year-end and New Year period.”

The end of the year is typically a time for drinking parties among office colleagues winding down for the break and a mass exodus of people on trains and expressways as families head for their hometowns. The first days of the new year always see many millions visiting temples and shrines to make wishes for the year ahead.

Suga used the opportunity to again apologize for attending dinner parties at a time when the government is calling on the public to avoid gatherings of more than five people at a time.

He also announced that stricter measures are being taken against arriving passengers from South Africa after a new strain of the novel coronavirus was detected there. He said that about 270 billion yen ($2.6 billion) from a government reserve fund would be set aside to ensure there are sufficient hospital beds to treat COVID-19 patients.

Turning to other steps, Suga said the government and ruling coalition would work on revising the special measures law to deal with the pandemic during the ordinary Diet session set to convene in January. But he did not state dates for submitting the relevant legislation or when it would pass.

Suga also apologized for the manner in which the Go To Travel tourism promotion campaign was abruptly temporarily suspended due to the spread of COVID-19 cases.

“Some of the explanations given to the public were insufficient,” Suga said. “In the future, I will make every effort to be more thorough in the way I communicate.”

Among measures to be considered for revising the special measures law is the inclusion of penalties against businesses that did not comply with local government requests to shorten their business hours, but Suga again indicated he was not thinking about declaring another state of emergency.

Asked if he really thought it would be possible to change the public's mind-set without such a state of emergency declaration, Suga said, “I believe the public will show understanding if we provide a thorough explanation at every opportunity given to us.”

And while he frowned at the continuing trend of people going out, Suga only said it was up to local governors to move up calls for shorter business hours.

Shigeru Omi, the chairman of the government panel of experts dealing with the health scare who accompanied Suga at the news conference, cited inadequate measures aimed at bars and restaurants where large numbers of people gather as a key reason for the continuing spread of cases.

Omi also said there was a very high possibility of another surge once the New Year holiday period is over and people resume their economic and social activities.

The same day, two Cabinet ministers apologized for gatherings that exceeded the limit called for by government officials.

Also on Dec. 25, Seiko Hashimoto, the state minister for the Tokyo Olympic and Paralympic Games, apologized for having dinner at a sushi restaurant in Tokyo on Dec. 17 with five others.

(This article was compiled from reports by Ayako Nakada and Daizo Teramoto.)