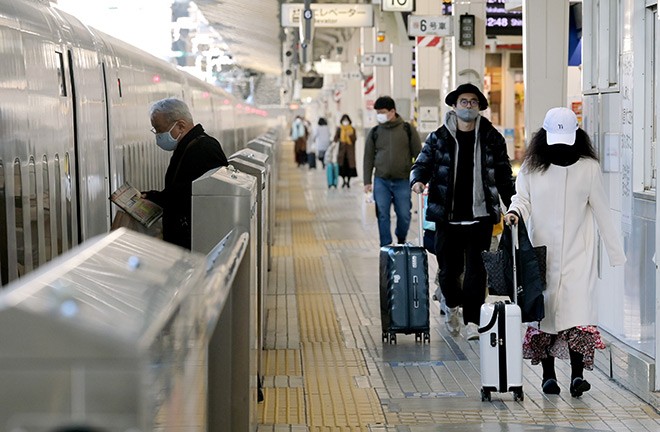 Few riders are seen on a platform at JR Tokyo Station in the capital on Dec. 26 the weekend before the nation enters the long New Year's holiday period. (Takayuki Kakuno)

New COVID-19 cases continue surging across Japan with 3,883 reported on Dec. 26, up 51 from the previous day, marking the fourth consecutive record-breaking day, according to authorities.

The number of coronavirus patients in serious condition rose to 659 on Dec. 26, up five from Dec. 25, according to the health ministry.

There were 47 deaths from the virus reported nationwide on Dec. 26.

The daily count on Dec. 26 marked the 12th straight day that a new high has been set for each day of the week in the capital.

The seven-day average of new infections in Tokyo over the most recent week hit 711.4, exceeding the 700 mark for the first time.

The death toll from the virus on Dec. 26 in the capital stood at 10, all patients in their 60s through 90s.

In Tokyo, a cluster outbreak among drivers on the Toei Oedo Line will force the disruption of service for more than two weeks.

The subway began operating at 70 percent of its usual runs from Dec. 27 due to a shortage of drivers after 21 either contracted or were exposed to the coronavirus.

The metropolitan government said 15 drivers tested positive for the virus between Dec. 15 and 24. Six more drivers were identified as those who had close contact with the infected.

The operator of the line, the Tokyo Metropolitan Bureau of Transportation, will offer usual service during the morning rush hour from 7:30 a.m. to 8:30 a.m. on Dec. 28, the last working day of the year for many companies and government offices.

But it will operate 30 percent fewer runs than normal through Jan. 11.

The 15 drivers all report for work at a crew station in Koto Ward, where they attend roll call and change into uniforms, according to metropolitan officials.

But it is not clear how they contracted the virus, they added.