VOX POPULI: Humans should be capable of outsmarting the coronavirus 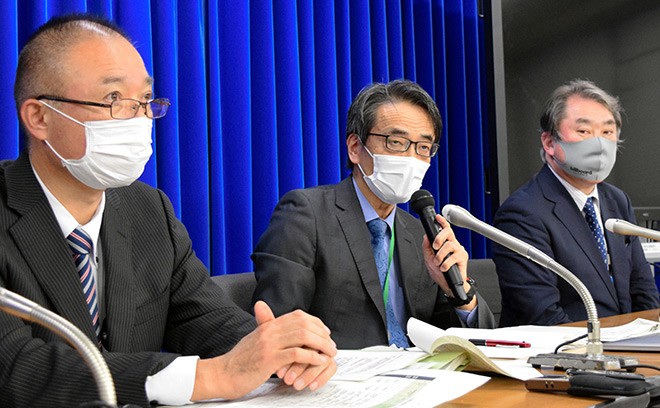 Takaji Wakita, center, head of the National Institute of Infectious Diseases, speaks about the new strain of the novel coronavirus at the health ministry in Tokyo on Dec. 26. (The Asahi Shimbun)

When a manuscript is printed for publication, it should be done with complete accuracy, but errors can creep in.

In the era of movable type printing, before computers, occasional misprints would be caused by picking up the wrong characters.

When Prime Minister Fumimaro Konoe (1891-1945) formed his Cabinet in 1937, an Asahi Shimbun article “misquoted” his statement through a single wrong piece of type.

It said the prime minister intends to “implement as many policy measures based on socialism (‘shakai shugi’) as possible,” where it should have said social justice (“shakai seigi”) instead.

People who read the article may have been shocked and wondered if a revolutionary regime had been born in Japan.

It appears that something like a typographical error also occurs in the world of infectious diseases.

Viruses replicate based on their genetic information, but they routinely make small mistakes and mutate into new strains.

In many cases, mutations do not change their basic characteristics. Still, a few variants become more contagious or more harmful.

The new strain of the novel coronavirus discovered in Britain reportedly has an increased transmission rate of up to 70 percent.

A growing number of countries, including Japan, have confirmed infections with the latest variant, underscoring the need to be on the alert.

Some experts believe the second wave of the Spanish flu caused greater damage than the first because of viral mutations.

The novel coronavirus, which also spreads through infected people showing no symptoms, has been described as a “wise virus.”

I hope the virus will mutate into a wiser and less harmful strain so that it can live within the bodies of people who have caught it without killing them.

Of course, things are never so convenient. It is humans who should behave wisely.

We should review our lifestyles and take steps to prevent the spread of infections wisely (“kenmei ni”) and assiduously (kenmei ni).

Let me add that an error was not involved in the use of these two words, which were typed into a personal computer the same way but converted into different combinations of kanji.