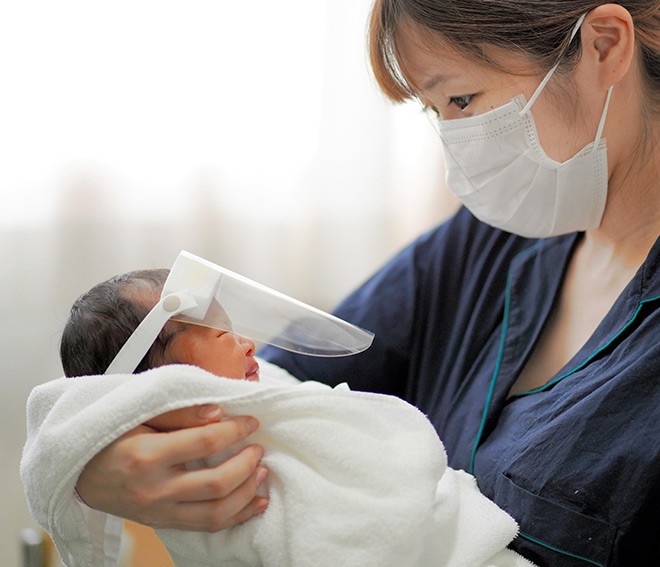 A mother cradles her newborn in Satte, Saitama Prefecture, in May. (Asahi Shimbun file photo)

Births in Japan are projected to fall to below 800,000 in 2021, according to an analyst, citing fears the novel coronavirus pandemic is accelerating the decline in the nation's birthrate.

The estimate is based on reports of fewer pregnancies this year.

Preliminary figures from January to October this year suggest an annual decrease of 2.3 percent.

The ministry usually releases an estimate of the population and number of live births at the end of each year.

But this year, it postponed doing so, due to uncertainties triggered by the COVID-19 crisis.

Instead, the ministry relied on a yearly calculating formula to project the number of births this year at around 848,000, or 2 percent less than in the previous year.

Births have steadily declined since the early 1970s when the second baby boom hit, falling below the 1-million mark for the first time in 2016.

But reality has far outpaced the institute’s estimate.

Takumi Fujinami, a senior chief analyst of the Japan Research Institute Ltd., said the pandemic has discouraged people from having children for the time being.

“There must be many people who have stopped taking fertility treatment,” Fujinami said.

The number of pregnancies reported to municipalities nationwide between January and October plunged by 5.1 percent year on year, according to the data release by the ministry on Dec. 24.