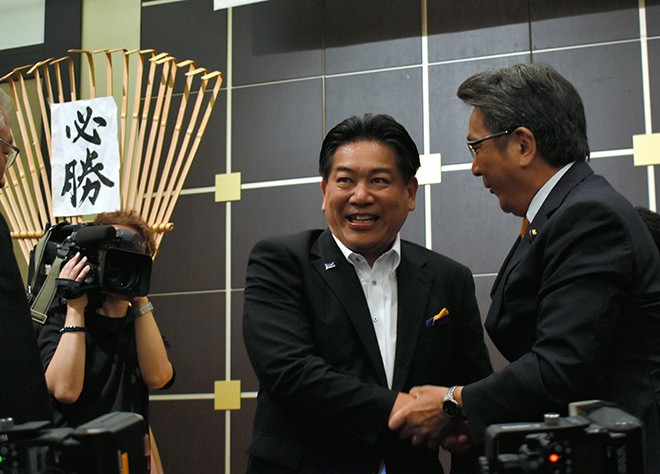 Yuichiro Hata, center, shakes hands with a lawmaker from his party after a news report said that he would win his race in the Upper House election. The photo was taken in Nagano in July 2019. (Asahi Shimbun file photo)

Hata died on Dec. 27 right before he underwent a test for COVID-19 after falling ill. He was 53. His infection was confirmed on Dec. 28.

Hata was secretary-general of the Upper House caucus of the CDP. He represented a district in Nagano Prefecture and was elected five times to the Upper House.

According to sources associated with the CDP, Hata had shown flu-like symptoms from a few days ago. He was scheduled to undergo a PCR (polymerase chain reaction) test for the novel coronavirus on Dec. 27.

But he fell into a critical condition before he arrived at a hospital, sources said.

Tetsuro Fukuyama, secretary-general of the CDP, posted a message of condolence on his Twitter account on Dec. 27.

Hata was a transport minister under the government led by the Democratic Party of Japan. He was the son of the late Prime Minister Tsutomu Hata.