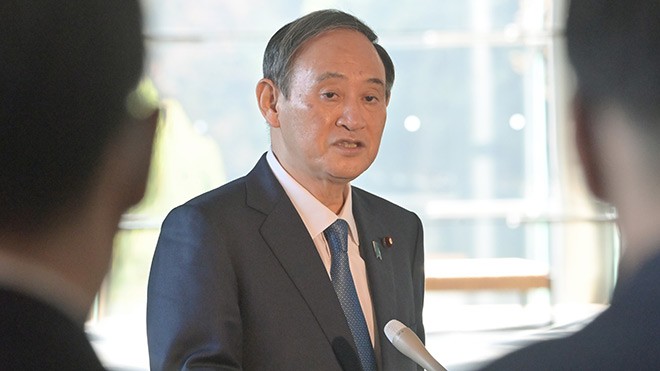 Prime Minister Yoshihide Suga talks about measures against the novel coronavirus at the prime minister’s office on the morning of Nov. 19. (Kotaro Ebara)

Japanese Prime Minister Yoshihide Suga says he plans to submit legislation that will make coronavirus measures legally binding for businesses, punish violators and include economic compensation as his government struggles to slow the ongoing upsurge.

Japan had a state of emergency in April and May with non-binding requests for people to stay home and business to close, but people have complacent about the pandemic and store owners have become less cooperative due to the economic impact.

Suga said experts are discussing the legislation to make coronavirus more effectively enforced and hoped to submit the bill for parliamentary approval “as soon as possible” next year.

Suga also reiterated his request for the public to spend “quiet” year-end and New Year holidays and stick to mask-wearing and hand-washing amid concerns of a new variant of the coronavirus that has spread in Britain and detected at airports and in Tokyo last week.

Japan is barring entry of all non-resident foreign nationals as a precaution against a new and potentially more contagious variant, from Monday through Jan. 31.

Suga’s government has been unable to slow the ongoing upsurge of the infections despite his requests for basic preventive measures.

His government has been criticized for delaying measures for weeks due to apparent reluctance to hurt the pandemic-hit economy, with recent media surveys showing about 30-point decline in his support ratings since he took office in September.

Japan is barring entry of all non-resident foreign nationals as a precaution against a new and potentially more contagious coronavirus variant that has spread across Britain.

The Foreign Ministry says the entry ban will start Monday and last through Jan. 31.

Last week, Japan banned non-resident foreigners coming from Britain and South Africa after confirming the new variant in seven people over the last two days--five from Britain who tested positive at airports and two others in Tokyo.

Japan is also suspending the exemption of a 14-day quarantine for Japanese nationals and resident foreigners that began in November. The entrants now must carry proof of a negative test 72 hours prior to departure and self-isolate for two weeks after arrival.

Japan is struggling with surging cases since November. It has confirmed a total of 217,312 cases including 3,213 deaths, up 3,700 from the previous 24-hour period. Tokyo alone reported 949 cases, setting a new record, despite calls by experts for people to spend a “quiet” holiday season.