Volcano erupts off Kagoshima, but no signs of injury or damage 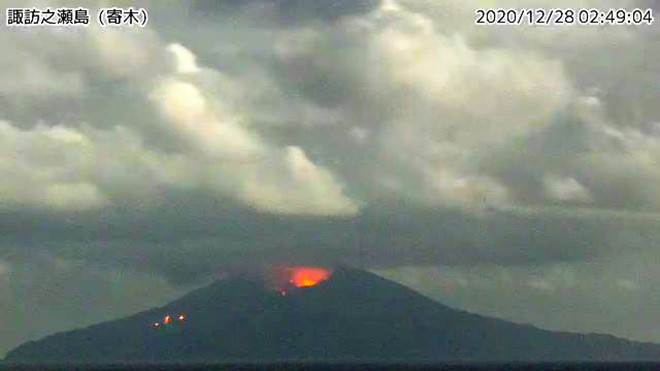 TOSHIMA, Kagoshima Prefecture--A volcano on a small island here with an 80-strong population erupted early Dec. 28, spewing large rocks and other debris into the sky, prompting the Japan Meteorological Agency to ban the entry to the mountain for the first time.

There were no immediate reports of damage or injuries, according to Kagoshima prefectural authorities.

Mount Otake, a 796-meter volcano on Suwanosejima island in Toshima village, has been particularly active in recent days and entry to the area around the crater remained banned under level 2 of the agency's five-stage volcanic alert.

However, the alarm was raised to level 3 to forbid entry to even the base of the volcano after the 2:48 a.m. eruption scattered ash and cinders about 1.3 kilometers to the southeast of the crater, according to the agency’s Fukuoka Regional Headquarters.

The Fukuoka Regional Headquarters issued a warning for residents to remain alert against large cinders falling.

Following the eruption, prefectural officials set up a task force to prepare a response for an emergency.

According to the Toshima village, 80 people in 40 or so households live about 4 km to the south of the crater.

The 27.66 square kilometer island lies about 300 km south of the prefectural capital of Kagoshima.