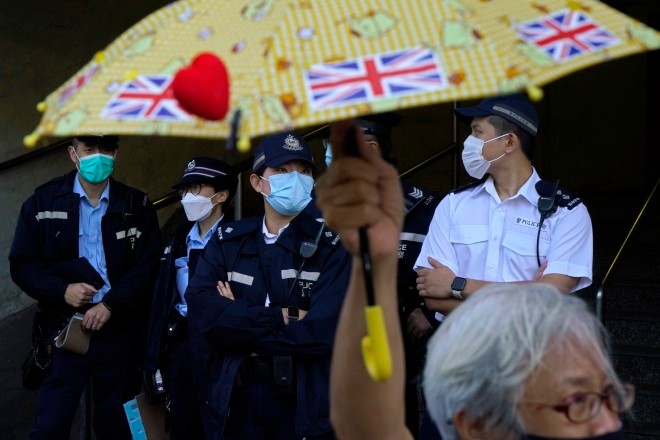 SHENZHEN--Security was tight on Monday as 10 people from Hong Kong faced charges in a mainland Chinese court that include illegal border crossing after a boat they were travelling in was intercepted en route to the democratic island of Taiwan.

Mainland Chinese authorities detained the 11 males and one female at sea on Aug. 23. The youngest is 16.

The 12, who had all faced charges in Hong Kong linked to anti-government protests in the city, have been held virtually incommunicado in a mainland prison since they were detained.

Chinese officials, who have described the group as separatists, said two of them would have a separate hearing as they are minors. It was not clear if the 10 were appearing in the court or were attending via video link.

They face charges of illegal border crossing and organizing an illicit border crossing, which could carry a sentence of up to seven years in jail, mainland authorities said.

The case has attracted much attention in Hong Kong as a rare instance of Chinese authorities arresting people trying to leave the former British colony at a time of growing fears about prospects for the city’s high degree of autonomy after Beijing imposed a draconian national security law in June.

Diplomats from countries including the United States, Britain, Canada and Australia, were denied entry for the much-anticipated hearing after authorities said the court was full.

“We’ve been denied entry. The official explanation given is that the case does not involve any foreign citizens,” one Western envoy told Reuters.

The detainees’ plight has grabbed international attention, with human rights groups raising concern over their treatment after their families said they were denied access to independent lawyers.

“They try to say it’s an open trial but they also say all the seats are occupied. The family members don’t have the right to attend the trial. That’s absurd,” said Lee Cheuk-yan, chairman of the Hong Kong Alliance in Support of Patriotic Democratic Movements of China.

“They don’t have the right to appoint their own lawyer. They don’t even know the names of the government-appointed lawyers.”

Earlier on Monday, the U.S. embassy in China urged authorities to release the fugitives and allow them to leave.

“Their so-called ‘crime’ was to flee tyranny. Communist China will stop at nothing to prevent its people from seeking freedom elsewhere,” the embassy said in a statement.

Pro-democracy activists began fleeing Hong Kong for self-ruled Taiwan from the early months of anti-government protests last year, most of them legally, by air, but some by fishing boat, activists in Taipei who helped Hong Kong citizens get visas have told Reuters.