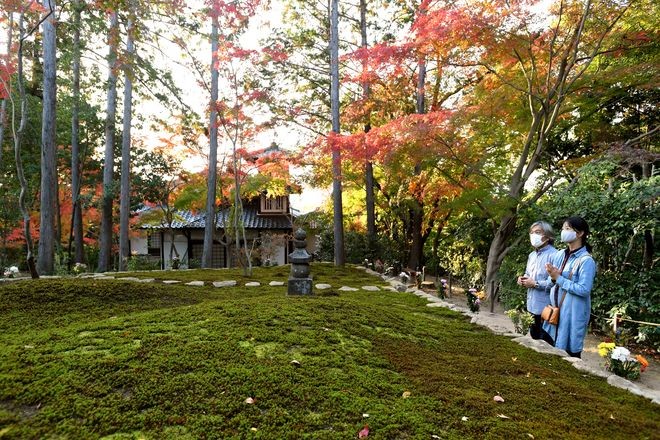 KYOTO--Under the autumn foliage, Kazuo Taniguchi, 76, and his wife, Etsuko, 75, wandered around the Shogakuan sub-temple here and picked a place to spend eternity together.

They had visited from Otsu in neighboring Shiga Prefecture to see the “tree burial graveyard” called Hoshuen in late October.

After deciding that one plot was the best because of the presence of a monument, the couple signed a contract for a grave for two people.

“This is the same feeling as when people choose an apartment room after they get married,” Etsuko said. “I am relieved because the last place I will sleep was decided.”

Such graveyards, where trees mark the remains instead of gravestones, have grown in popularity, and not just in Kyoto, which has at least five sub-temples offering the service.

Tree burials are ideal for those who want to “return to nature” after they die. The burials also get around the “family-succession” aspect of traditional graves, especially if the individual has no successors. And they cost less and are much easier to manage than conventional graves.

Shogakuan is a branch temple of Tofukuji temple in Higashiyama Ward, the head of the Tofukuji School of the Rinzai sect of Zen Buddhism and renowned for its beautifully colored maple leaves.

Shogakuan, established in the Kamakura Period (1185-1333), opened its tree burial graveyard in July 2018 after Buddhist parishioners expressed their wishes for tree burial plots. Currently, 60 to 70 percent of the parishioners live alone or do not have children in Kyoto.

“It is getting more difficult to inherit conventional graves based on the family system,” said Shogakuan head priest Koshu Hirazumi. “The number of Buddhist parishioners is expected to decrease, so I hoped that I could stabilize our temple’s management by building new relationships.”

The graveyard is about 30 meters by 15 meters, surrounded by stone masonry and covered by green hair moss.

A small five-ring pagoda stands at the center, and Japanese cedar and maple trees are used instead of grave markers.

One plot is 25 centimeters square. The remains of the customers are put in cloth bags and buried in the plots.

Burial fees are 30,000 yen per person, while the annual maintenance fee is 5,000 yen, much less than the price at conventional graveyards.

The first two rounds of sales resulted in contracts signed for 120 of the 146 available plots.

Even during the COVID-19 pandemic, the tree burial business has been doing well, with five to seven applications submitted a month.

The sub-temple started its third round of sales in October, offering 400 plots.

According to a Kan Sogo Keikaku official, “many” temples have contacted the company about opening tree burial graveyards.

A joint survey by the company and the University of Tsukuba showed that 70 percent of people who made tree burial contracts with these five sub-temples were residents of the Kansai region, which covers Kyoto. The remaining 30 percent included many residents in the Tokyo metropolitan area as well as some from overseas.

Azumi Shibahara, 60, from Yokohama, made a contract with the Shogakuan sub-temple for her father, who died two years ago. She initially considered a park-style graveyard in the Kanto region, but she wanted to respect his dying wish to return to nature and chose the Kyoto temple surrounded by trees.

“His burial here will be an incentive for family members to gather at his favorite place, Kyoto,” Shibahara said. “It is a branch of the head temple that has continued to exist for hundreds of years, so I feel assured of its future, too.”

According to the survey, 30 percent of respondents made tree burial contracts because they felt the sacred atmosphere inside the temple areas. Another 30 percent said that they did so because they like Kyoto.

Manpukuji temple in Uji city, south of Kyoto city, is the main temple of the Obaku sect. It opened a park-style graveyard called Memory Garden in 2016, and more than 100 contracts for tree burials there have been made.

“I feel that demand for tree burials has been growing year after year due to changes in people’s lifestyles,” a temple official said.

A tree burial graveyard started at a temple in Ichinoseki, Iwate Prefecture, in 1999, and has since spread over private and public graveyards.

According to Hisako Makimura, a guest researcher at Kyoto Women’s University who wrote the book “Ohaka no Shakaigaku” (Grave Sociology), Japan has a few hundred tree burial graveyards, although the exact number is unknown.

She said the number has been increasing mainly in Tokyo, Osaka and other metropolitan areas where gravesites are in short supply as deaths are rising in the aging society.

“The number of tree burial graveyards will undoubtedly continue to increase in the future,” Makimura said.