Man, 92, recalls how rugby got him through World War II 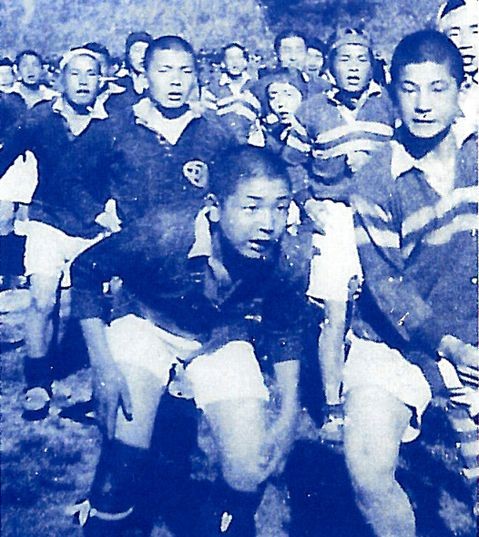 OSAKA--The stands are empty at the Hanazono Rugby Stadium for the 100th National High School Rugby Tournament, but the quiet cannot quell the enthusiasm of Shigeo Oiwa, a 92-year-old resident here.

To prevent novel coronavirus infections, spectators, including family members of the players, are banned from attending games at the 63-team tournament, which started on Dec. 27 in Higashi-Osaka, Osaka Prefecture.

Oiwa recalled the time when the entire tournament was called off. That was during World War II, when his childhood was surrounded by death, destruction and uncertainty.

But playing rugby, he said, helped him get through the tough times and led to his lifelong love of the sport.

His brother Hiroshi, who was five years older, had been a member of the school’s rugby team when it twice competed in the national tournament.

About a month earlier, the Japanese military attacked Pearl Harbor, opening the Pacific War against the United States.

The war affected the national rugby tournament, and organizers ended up hosting separate tourneys, one for the Kansai region and one for the Kyushu region.

His presence on the field chasing the ellipsoidal ball had a huge impact on the young Oiwa.

As soon as Oiwa started attending the Kitano school, aggressive recruiters asked him to join the rugby team “because your brother played.”

The school at the time offered a five-year course and had students ranging from the seventh to 11th grades.

Oiwa quickly noticed the physical differences between him and seniors on the team.

“If I compete squarely with them, I will be crushed,” Oiwa thought at the time. His counter strategy was “to run hard with them.”

Oiwa soon became hooked on rugby. He preferred playing in a forward position rather than in the backfield because, he said, forwards “work together” while backs seemed to be a lonely position.

At that time, the impact of the war loomed over every aspect of life.

Hiroshi had graduated from a military air force academy in Saitama Prefecture and joined the air force.

In autumn 1943, when Oiwa was in his second year at the school, Hiroshi returned home. His words at the dinner table shocked Oiwa.

“We will lose the war. So, we, the career soldiers, will have to die first,” Hiroshi said.

“Go beat up the enemy, and return home safely, please,” Oiwa thought at the time.

About half a year later, Oiwa came home one day and found his father sick in bed. He smelled burning incense sticks and instantly knew something terrible had happened.

Hiroshi was killed in battle in what is now Malaysia. He was 20 years old.

The national rugby tournament scheduled in January 1944 was canceled while holding rugby matches against teams outside the school was banned.

Still, Oiwa and his friends continued to practice.

“I couldn’t quit,” Oiwa said. “It didn’t matter that the tournament was no longer held. Playing rugby itself was fun for me. I think I was obsessed.”

In September that year, Oiwa and his teammates were told they could no longer use the rugby clubhouse. Practice was also banned.

Classes at the school were then canceled, and the students were mobilized to build water reservoirs and anti-air raid shelters.

Oiwa and other students even traveled to Wakayama Prefecture for a two-week stay to build trenches to ambush enemy forces.

“We had no choice. We were swept up by the times. We thought we had to (give up rugby) in order to win the war,” he recalled.

Oiwa’s home was burned down in one of the Great Osaka Air Raids in June 1945, forcing him to live in a hut.

“We are defeated. What is going to happen now?” Oiwa said he felt at the time.

A RETURN TO NORMALCY

The school resumed classes in September 1945, and Oiwa was reunited with two rugby-playing fourth-graders. The school campus was damaged by the air raids, but the clubhouse survived, as well as few rugby balls.

One of the balls was a special one commemorating the school’s championship at the 1942 Kansai tournament, the team that Hiroshi had played on.

They did not have shoes and wore “fundoshi” loincloths and a few items of clothing they had on hand.

The General Headquarters of the Allied Forces (GHQ) had ordered a discontinuation of kendo and judo club activities at schools. Oiwa invited students who belonged to these clubs to join the rugby team.

The youngsters were always hungry because of the postwar food shortages, but they never stopped playing rugby. The sport allowed them to forget about the despair and worries they felt in those turbulent times.

One day, senior students returned to the school from the battlefields. They picked up the few available rugby balls and started passing them around.

Oiwa and his friends wanted to demand the seniors give back the balls because they were also practicing. But they did not.

“They went to the war, thinking that they would die. Now they are back here, safely,” Oiwa said he thought.

Seeing the older students embracing the sport and life, Oiwa thought about Hiroshi.

“I wish he were alive,” he kept thinking.

In January 1947, when Oiwa was in his fifth and last year at the school, the national tournament resumed.

Oiwa’s team advanced to the final of the qualifying round, but he was injured and did not play in the game. The team lost to Tennoji Junior High School in Osaka.

He graduated from the school, took a job and stopped playing rugby.

Although he never competed in the national tournament, he did get a taste of playing in a big game in front of a huge crowd.

In December 1945, the Kitano team had a regular match against Tennoji at a stadium in Nishinomiya, Hyogo Prefecture. Oiwa played prop forward. The crowd was so big that some spectators left the stands to watch the game from inside the field. The fans even threw out-of-bounds balls back to the field to the disadvantage of Oiwa’s team.

Since then, 75 winters have passed. Oiwa has never stopped cheering for his school’s rugby team and has attended many games in the qualifying round of the national tournament.

Although he played rugby for only four years, the experience was “very dense,” Oiwa said.

“It wasn’t just about winning a game or trying to go to Hanazono,” Oiwa said. “Taking on a tough challenge together with friends and chasing the ball hard. That’s what rugby is all about.”

Oiwa said he hopes today’s high school players “cherish the feeling of love for rugby,” like he still does.