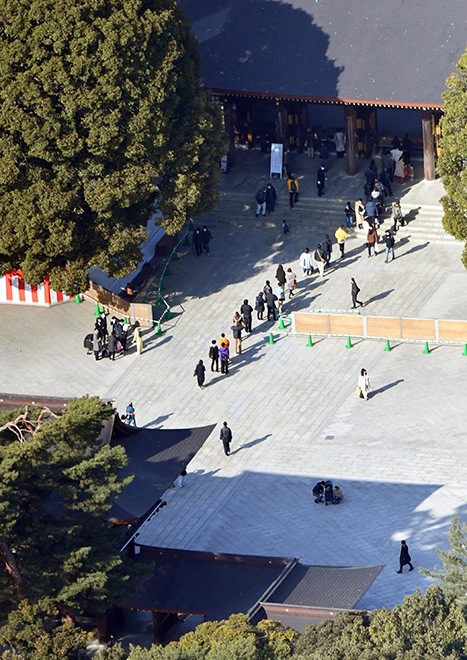 A relatively sparse crowd visits Meiji Shrine in Tokyo’s Shibuya Ward to make wishes for the coming year on Dec. 27 and avoid the hordes of visitors expected during the first three days of 2021. (Kazuyoshi Sako)

Tokyo reported 856 new COVID-19 cases on Dec. 29, obliterating the Tuesday record by nearly 300 and sending an ominous sign to medical facilities at the start of the holiday period.

The figure was more than 1.5 times the previous high of 563 set exactly a week ago and represented a huge jump from the 481 newly confirmed novel coronavirus infections on Dec. 28 in the capital, according to metropolitan government officials.

Despite government requests for alcohol-serving businesses to shorten their hours and for residents to avoid travel, the daily numbers continue to climb. In fact, the latest tally represented the 15th straight record high for the day of the week in Tokyo.

Hospitals in the capital and other hard-hit urban areas fear a further increase in COVID-19 cases will strain their services and fill up available beds because many medical facilities are closed for the year-end and New Year holidays.

The number of COVID-19 patients in serious condition increased by three to 84 on Dec. 29, the officials said. Tokyo defines serious cases as those requiring ventilators or extracorporeal membrane oxygenation, also known as an ECMO lung bypass machine.

The rate of positive tests continued to rise in Tokyo, indicating that community infections are widespread.

The rate on a weekly basis remained around 3 percent in early November. But a preliminary figure showed the positive test rate rose to 8.4 percent as of Dec. 27, the highest since the nationwide state of emergency was lifted in late May.