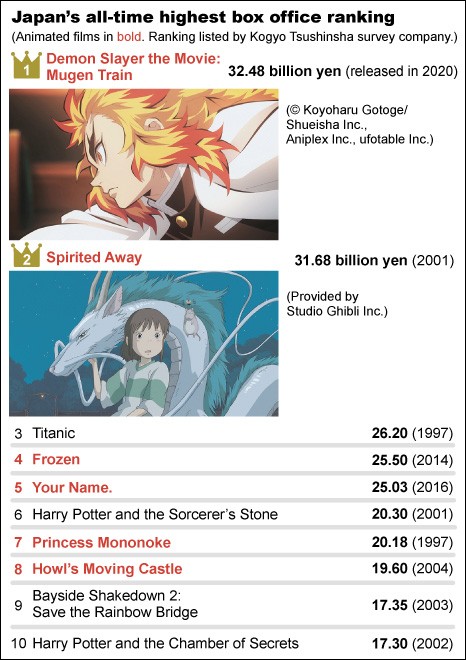 “Total concentration,” the short snatch of dialogue uttered by a character in the animated TV series “Demon Slayer,” became a buzzword this year.

It also sums up the grip the series and then the film had on the Japanese public in 2020.

The series, adapted from the popular manga of the same name, was broadcast during a late-night slot last year, becoming wildly popular.

Minami Ichikawa, a managing director of major film distributer Toho Co., spoke about why the movie became a blockbuster at a news conference on Dec. 15.

“Above all, the movie itself is wonderful. The visual quality of the animation is very high,” he said. “The themes on friendship and love for families struck a chord in Japanese hearts.

“More people read its original manga and watched its animation on video streaming as they stayed at home longer under the coronavirus pandemic,” Ichikawa said.

“The releases of new foreign major movies were postponed, so the ‘Demon Slayer’ movie was able to be screened as much as possible. These factors contributed to making it the biggest hit.”

At Toho Cinemas Shinjuku theater in Tokyo, the “Demon Slayer” movie was shown on 11 of its 12 screens on opening day and screened a total of 42 times, including late-night showings.

Even in urban areas outside the capital, some cinema complexes showed it more than 30 times a day.

“Demon Slayer” seemed to hijack movie theaters across the nation.

The film became a tremendous hit partly because restrictions on the number of seats at cinemas imposed due to the COVID-19 pandemic were lifted just before it was released.

The timing generated both higher interest from cinemas, with more than usual wanting to screen it and from movie fans, who had been waiting to return to cinemas.

“Cinema complexes can increase the number of screens for a particular movie flexibly and drastically based on the demand,” movie journalist Hiroo Otaka said. “Cinema complexes also contributed to the success of ‘Spirited Away.’ If cinema complexes were popular in those days, ‘Princess Mononoke,’ also directed by Hayao Miyazaki, would have earned higher box offices.”

Otaka also said that the movie turned into a blockbuster because it became a hot topic on social media. The news on the film's numerous screenings and record-breaking box office during the first week of release generated huge interest online.

“With enormous media exposure, information on the movie never stopped circulating,” Otaka said. “People talked about it like a chain reaction. Such a fever brought people who didn't know about 'Demon Slayer' to those movie theaters.

“Most importantly, the work has its own great power, so it didn't let them down.”

Its power to dominate screens, however, ended up in other films released in the same period as “Demon Slayer” running short of cinemas.

“Wife of a Spy,” honored with the Silver Lion Award, or best director award, at the Venice International Film Festival, released on Oct. 16, was one such film.

“Many screens were allocated for the ‘Demon Slayer’ movie especially on weekends,” an associate of the film production said. “Movie theaters didn't let us use their screening venues for our film.”

“The Voice of Sin,” starring Shun Oguri and Gen Hoshino, was released on Oct. 30.

“All people talk about is ‘Demon Slayer,’ especially on TV,” an associate of the film production said. “The movie becoming the all-time greatest has a negative side for the entire film industry.”

“But there are many cases where movies adapted from popular TV dramas become a hit and earn several billion yen (several tens of millions of dollars) at the box office,” he continued. “The same kind of thing might have happened with the animated film.”

From the perspective of the anime industry, Sudo believes that the success of animation production and distributor Aniplex Inc. stems from its bold strategies.

In an unusual move, the “Demon Slayer” TV animation was broadcast on as many as 20 TV stations, mainly local ones, during the late-night slot.

The show can also be viewed on more than 20 video streaming services, such as Netflix or Hulu.

“The company increased the showing of the TV series and the movie as much as possible through TV broadcasting, video streaming and screens at theaters,” Sudo said.

“The movie tied up with many other kinds of media and a wide range of companies until reaching its limit. The company bet boldly on its strategy and made a huge success.”

(This article was written by Atsushi Ohara and Kenji Komine.)