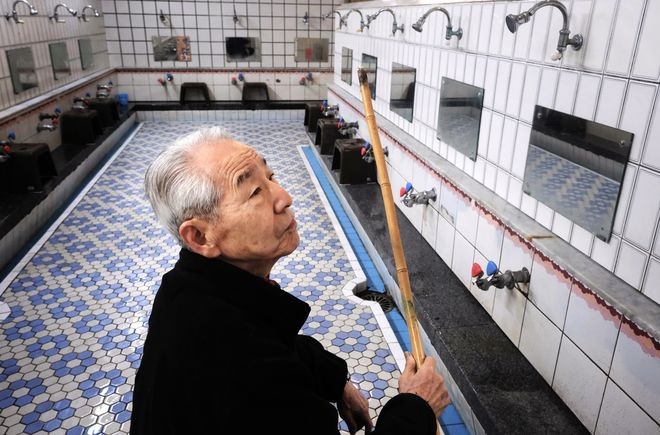 Akashiyu, a “sento” in Osaka’s busy Minami area, has gone through several ups and downs, but the novel coronavirus has proved a hurdle impossible to overcome.

With its facilities deteriorating, the sento closed for good on Dec. 26.

“I have nothing but appreciation for being able to be in business for so long,” Eiji Nishino, its 79-year-old owner, said. “I am sad. But it’s the trend of the times.”

The bathhouse opened in the center of Minami 71 years ago. Nishino inherited the business from his father in 1968, two years before the city hosted the World Expo.

It was an ebullient time, Nishino recalled.

Akashiyu was not just a bathhouse. It had a sauna on the third floor and massage rooms on the fourth floor.

For people who worked in Minami’s nightlife industry, the bathhouse was a hangout and a place to relax and recover from fatigue.

“It doesn’t matter if you are a geisha, a playboy or a yakuza member. Once you strip yourself naked, you are all the same,” Nishino said. “It is important to release some steam, as well.”

Despite all the colorful characters who have bathed at Akashiyu, Nishino said the most memorable night was on Sept. 15, 2003, when Hanshin Tigers professional baseball team won the Central League pennant for the first time in 18 years.

Supporters of the Tigers are known for their loyalty and fanaticism. As expected, young fans went wild that night and jumped into the Dotonbori river that runs through the busy streets of Minami.

Nishino was prepared. He posted a warning at the entrance: “No bathing.”

Still, more than 15 dripping wet people rolled into the bathhouse smelling of the river water, which was not known for its purity.

Other customers complained to Nishino: “They’re so stinky! Please do something!”

Nishino, however, decided not to turn away the Tigers fans.

“I accept whoever comes to the bathhouse,” he said.

It has been a business motto of the bathhouse, as well as a life lesson that he has offered to customers over the years.

“You can’t drive people into the corner too much,” he said, laughing.

Luckily for Akashiyu customers, the Tigers have won the pennant only once since then.

But after the pandemic started spreading around the nation in April, the bathhouse lost 40 percent of its customers.

Its regulars were workers at host and hostess clubs, as well as “izakaya” pubs. Under the nationwide state of emergency, such businesses were asked to temporarily shut down, and many closed permanently.

“They lost their jobs and disappeared,” Nishino said.

After having a discussion with his oldest son, who has co-managed the business, Nishino decided to say goodbye to the bathhouse.

He said he has never seen the streets of Minami so empty.

Although the bathhouse is gone, Nishino has not stopped giving up hope.

“You have to stay still when things are going bad,” he said, “because there is no night that does not dawn.”