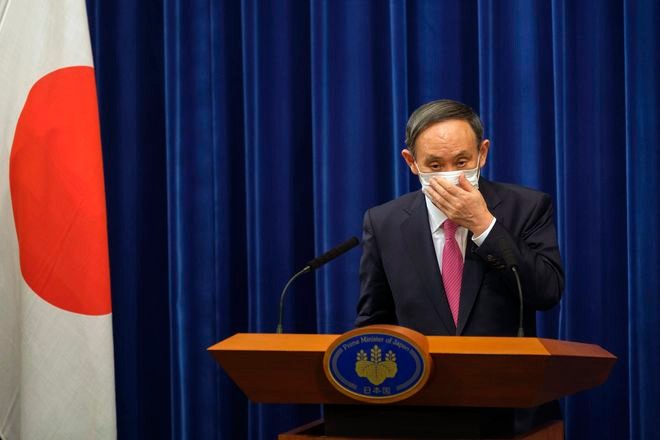 Prime Minister Yoshihide Suga adjusts a face mask after a news conference on the COVID-19 situation in Japan at the prime minister's office in Tokyo on Dec. 25. (Pool Photo via AP, File)

Prime Minister Yoshihide Suga came to office on a wave of popularity, pledging to combat the coronavirus and fix Japan's languishing economy.

Three months after he took over from his former boss Shinzo Abe, a more charismatic leader from an influential political family, Suga seems to be struggling to find his feet. His support ratings have sunk amid flaring virus outbreaks and scandals within the ruling party, even as the economy appears to be recovering.

On Monday, the Nikkei financial newspaper said its latest survey found approval ratings for Suga’s government had sunk more than 30 points to 42% from 74% in late September. The 48% of those questioned who disapproved mainly cited a lack of leadership and poor handling of the pandemic.

One big source of trouble has been the government’s “Go To Travel” campaign, which provides steep discounts for domestic travel.

The program was launched in the summer, before Suga took office. It was suspended as of Monday, but many Japanese believe it helped spread the virus and should have been halted sooner.

Experts, including COVID task force chief Shigeru Omi, said Suga’s insistence on continuing GoT o promotions until recently sent a muddled message at a time when the government is urging people to scale back activity.

So did his attendance at an expensive steak dinner for eight, including several celebrities and other political bigwigs, on Dec. 14 just hours after his decision to suspend “Go To Travel." At the time, the government was urging people to avoid wining and dining in groups of more than five, and advising anyone over 65 to stay home if at all possible--Suga is 72.

With coronavirus cases surging--about 2,400 new cases were reported Monday--the government’s handling of the pandemic is being called into question. The dinner and other gatherings have drawn criticism from the public and even Suga's own coalition.

On Monday, the government started barring all non-resident foreigners from entering the country to help curb the spread of a more infectious variant of the coronavirus that was recently discovered in Britain.

But for much of the past month, Suga did nothing, Nobuo Gohara, a lawyer and a political commentator, said in an online program. “He has the image of a leader who cannot resolve problems,” Gohara said.

Suga has suggested that a lack of cooperation from the public and businesses has driven the latest big wave of cases. He is now proposing legislation to enable the government to issue binding orders--it now can only issue requests--to oblige businesses to comply with requests for earlier closures and other precautions.

The proposal would also create a legal basis for the government to pay compensation for business owners who cooperate, and punish those who don’t, as widely seen in Europe and the U.S.

Meanwhile, Tokyo Governor Yuriko Koike and other local leaders of cities and regions facing many cases have enacted their own measures, including requests for drinking places to close early. Koike also has asked the residents to stay home during New Year holidays and to avoid crowded shrines and parties.

Japan’s overall handling of the pandemic has been praised by many: with just over 223,000 total cases and 3,306 deaths as of Monday, it has done better than scores of other affluent countries.

But the latest surge has many here worried, especially given the government’s lackluster, often faltering approach to dealing with the crisis.

Medical workers say regular medical care is suffering as the number of serious COVID cases rises. Japan's first approval for a coronavirus vaccine will not come until February at the earliest, Suga has said. Meanwhile, health workers and the elderly already are getting shots in the U.S., Britain and other parts of Europe.

Suga’s cautious approach mirrors that of Abe, who waited until late March to announce the postponement of the Tokyo 2020 Games. Surveys show many Japanese believe the Games should either be cancelled or postponed yet again, given the uncertainties over the pandemic. They prefer that government money be used instead to fight the virus.

The son of a strawberry farmer from northern Japan, in mid-September Suga was backed by Liberal Democratic Party boss Toshihiro Nikai in a party leadership race to replace Abe, who resigned citing a chronic health problem.

Having served as Abe’s chief cabinet secretary for all of his administration, Suga was amply prepared for the job. But he also has inherited scandals left over from Abe's time in office.

Last week, prosecutors declined to indict Abe for illegal book keeping by his office related to dinner receptions for his supporters during Japan’s cherry blossom season. Abe apologized for one of his aides having been charged with political funding law violations but insisted on his own innocence, setting off an outcry among opposition lawmakers who are pushing for further investigation.

One of Abe’s former farm ministers resigned as a lawmaker and was hospitalized last week just before prosecutors launched a bribery investigation, and a former justice minister is being tried over alleged vote-buying.

Such distractions are rife in Japanese politics, where scandals are routine, but they have overshadowed Suga’s efforts to win the public over with lower mobile phone rates and ambitious projects for digital transformation and achieving net carbon zero emissions by 2050.

Getting the pandemic under control is crucial for Suga as he weighs the timing of parliamentary elections. It will likely determine if Suga will prevail in a party leadership race in September.

“When will Prime Minister Suga, the author of a book ‘Resolution of a politician’ whose motto is ‘Where there is a will there is a way,’ take a decisive action?" political journalist Hioshi Izumi said an article in the online version of the financial magazine Toyo Keizai.

That outcome is just as uncertain as the fate of the pandemic, he added.