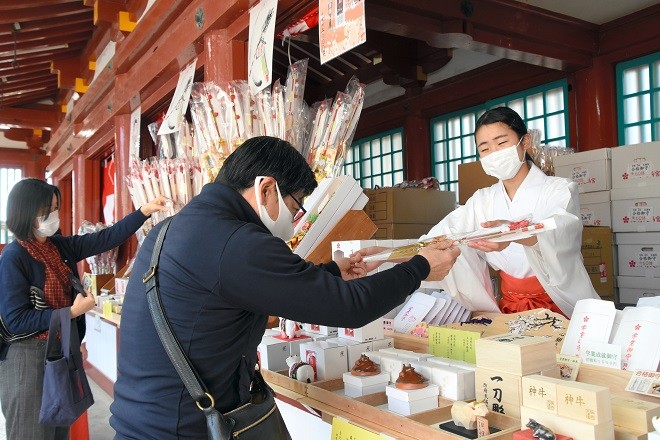 A visitor purchases a "hamaya" talisman arrow at a shrine in Bofu, Yamaguchi Prefecture, on Dec. 26. (Takero Yamazaki)

In one of his essays, poet Mokichi Saito (1882-1953) recalled his childhood experience of the Japanese New Year's rite of "hatsumode," the year's first visit to a Shinto shrine or Buddhist temple to pray for good luck.

As the day of the visit neared, he bathed himself each morning with cold water and tried not to kill any fish or bugs. The journey with his father to the destination--the Sacred Mountain of their faith--took them two days on foot.

While trekking along a mountain path in a rainstorm, young Saito's umbrella got blown away. And he almost slipped while crossing a frozen valley and had to proceed on all fours.

"Unlike nowadays, we did not take the train half-way to the destination," he wrote.

The now-familiar hatsumode scene of hordes of people taking trains to famous temples such as Kawasaki Daishi and Naritasan Shinshoji became established from the Meiji to Taisho Era (1912-1926), according to "Hatsumode no Shakaishi" (Social history of hatsumode) by Noboru Hirayama.

The transition was aggressively promoted as a kind of pleasure trip by railway companies that began extending services to outlying areas.

Since crowding is part and parcel of hatsumode, this national ritual is in for a major transformation during the coming New Year.

People are being urged to stagger their visits to avoid the first three days of January, and railway companies are suspending their traditional all-night services on New Year's Eve.

At a Shinto shrine in my neighborhood, which I went to scout yesterday, hatsumode had already begun.

"Engimono" New Year's good luck charms were on display for early visitors to purchase and there actually were some people picking up "hamaya" decorative arrows that are supposed to ward off evil.

Come to think of it, how you practice this ritual is really a matter of conscience. Coming to pray on the day of your choosing probably brings far greater peace of mind and satisfaction than blindly following tradition and getting caught in a mass of humanity, wondering if you'd come to pray or just wait in line for hours.

To ensure contact-free dispensation of "omikuji" fortune slips, some shrines have created omikuji apps for smartphones. I also understand that a "drive-through" blessing service will be making its debut.

This era of the novel coronavirus appears likely to bring changes to Japan's New Year scene.