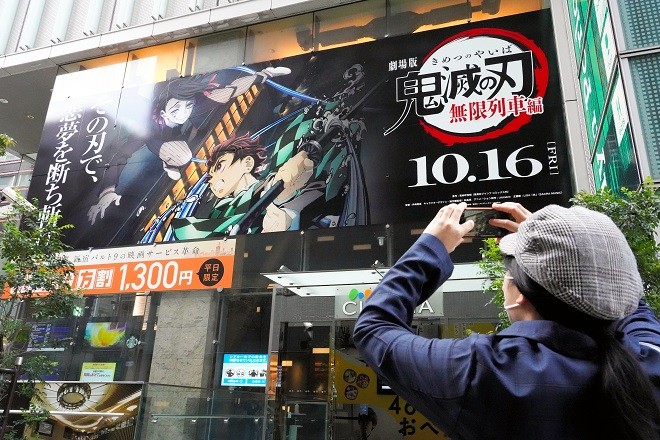 A passer-by snaps photos of the signboard in front of Toho Cinemas Shinjuku of “Demon Slayer the Movie: Mugen Train” on Oct. 16, the film's opening screening day, in Tokyo’s Shinjuku Ward. (Tsubasa Setoguchi)

The Japanese film industry marked a milestone this year even as the novel coronavirus pandemic cast dark shadows over society.

Audience turnout registered 24.04 million in the roughly two months since the film's release.

Set during the Taisho Era (1912-1926), the story revolves around a youth named Tanjiro Kamado, whose family was massacred by the demon Muzan Kibutsuji. His younger sister, the sole survivor, is transformed into a demon, and Tanjiro joins the Demon Slayer Corps to return her to human form.

The film was adapted from a popular manga series, and its timeless themes of battling on, personal growth, friendship and love of family struck a chord with people across generations.

The film's phenomenal success no doubt owed to a combination of factors. For instance, it has been pointed out that its anime version, which aired on television before the film's release, was watched widely while people remained cooped up in their homes. A media blitz that preceded the film's release also proved highly effective.

But one factor that cannot be overlooked is the sense of impermanence of life, which permeates the film, something that many people must have felt in the year now ending.

The young protagonist trusts his allies and continues practicing self-discipline while struggling with the pain of having lost his family. And despite his sense of powerlessness, he keeps moving forward while facing many obstacles in his way.

"The film's message is that precisely because humans are fragile and weak, they try to be strong and are capable of trusting one another and stand up together," observed Seiichi Takeuchi, professor emeritus of ethics at the University of Tokyo who has studied the history of Japanese spirituality. "And I believe this message resonates with the melancholy of people living amid the pandemic and gives them quiet reassurance and encouragement."

Talking with friends and family, sharing a meal with others, going to school or the office, taking a trip and enjoying sports, arts and culture were all things we used to take for granted. But they are now all denied to us.

COVID-19 has claimed more than 3,000 lives in Japan alone, and many people are in dire financial straits or experiencing psychological issues. But there also are those who are continuing to work hard to help maintain some semblance of normalcy.

This reality appears to have found a parallel in the "Demon Slayer" world, where the protagonist strives to overcome difficulties for the sake of his family and allies and lives to the best of his ability.

Philosopher Ikutaro Nishida (1870-1945), who experienced the grief of losing his young daughters, famously said that philosophy must be rooted in the deep sadness of living.

Sadness saps people of energy, but it also makes them grow internally and deepen their understanding of their fellow beings, thereby serving to add depth and breadth to their lives.

The year 2020 is winding up. This has been a difficult and painful year, but precisely because of that, we were made aware of the preciousness of our humdrum daily existence as well as flaws in our society.

Although the future will remain elusive for some time to come, we hope to be able to draw strength from our experiences of helplessness and distress, and just keep moving forward.