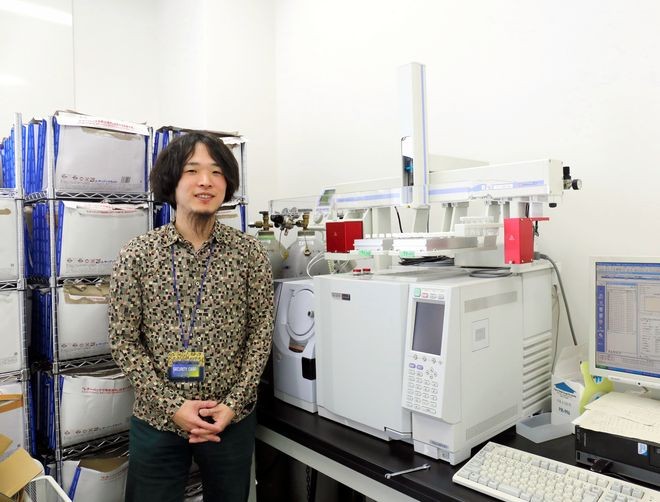 WAKO, Saitama Prefecture--People who fear that foul body odor may be why friends and colleagues are avoiding them no longer need embarrass themselves by asking others to give them a sniff.

Odorate Co., which is based here, is offering a service that analyzes the odor level clients emit. Orders are pouring in.

The service has personal roots for the company's President Shota Ishida. The now 30-year-old odor analyst was inspired to start the company after being haunted as a graduate student by his own fear of stinking up a storm.

The problem was complicated by the fact that though he suspected his body odor was what was making people around him feel uncomfortable, he could never quite be sure, causing him great anxiety.

“People who are worried about their body odor can't share their problem with anyone, so they take it more seriously,” Ishida said. “I'd like them to judge it based on objective data.”

People who sign up for the service receive an analysis kit that includes a T-shirt, among other items.

They are asked to paste activated charcoal material in the kit on the T-shirt to absorb odors, and then wear the shirt for 24 hours before returning it to Odorate.

The company then provides the client with a report on the odor level detected at eight points on the upper half of the body, including the armpits, neck and back.

The report includes an estimate on the unpleasantness level rated from 1 to 5.

Information on the impression the smell gives to people, such as it being sensed as “sour,” and the distance in which others can sense the stench are also provided.

Specialized equipment is also used to assess how much a client's body scores for containing 25 chemicals that are present in foul armpit odors and unpleasant smells associated with elderly people.

The data is then used to advise clients on how to wash their clothing and how to take a bath, among a number of countermeasures to combat foul odors.

Odorate has only one permanent worker, but 1,000 clients have signed up for its service. More than 100 people have also joined another in-person consultation program Odorate offers at the same price.

The origins of Odorate date to Ishida's days studying at Hitotsubashi University’s graduate school, where he was so busy that he slept in his lab.

Seeing people around him suddenly crack open windows and turn their faces slightly away, Ishida worried he might have begun to stink and started using an antiperspirant spray.

Once he became obsessed with the notion that he was scaring people off with his body odor, even meaningless behavior by others made him feel uneasy.

Finally, Ishida asked a friend to give it to him straight over whether he stank, who reassured him that he had been worrying the whole time over nothing.

Hearing this was a eureka moment for Ishida, as it dawned on him that it's actually quite difficult for people to judge their own body odor. He also realized people have high psychological hurdles that prevent them from letting people who smell bad know about it.

In 2016, Ishida began examining market conditions for setting up his company while working at an information technology service provider.

He spent two years surveying 100 people on social media that asked about their problems with body odor and what steps, if any, they had taken to deal with them.

The survey results convinced him there was indeed a need for a service that would objectively evaluate bodily odors.

After quitting the IT company, he began offering the service in August 2019 within the Wako-Riken Incubation Plaza, which is open to entrepreneurs who hope to receive assistance of the Organization for Small & Medium Enterprises and Regional Innovation and Saitama Prefecture.

Most of Odorate's current customers are in their 40s. But the company has received numerous other inquiries seeking help from those in other age groups.

One man in his 60s said his body odor had plagued him “since puberty," condemning him to lead a timid life that hurt his chances in "love and employment.”

Ishida noted many of his consumers are “simply far too concerned" over whether they smell bad and "don't smell bad in actuality.”

“Some people are surprised to hear that they don't need to take any more steps" to solve their problem, he said.

Odorate is now developing an easier and cheaper kit that clients can use to confirm if their armpits do indeed stink.

The new service is expected to be available by the end of January. For details, visit Odorate’s website at (https://odorate.co.jp/).